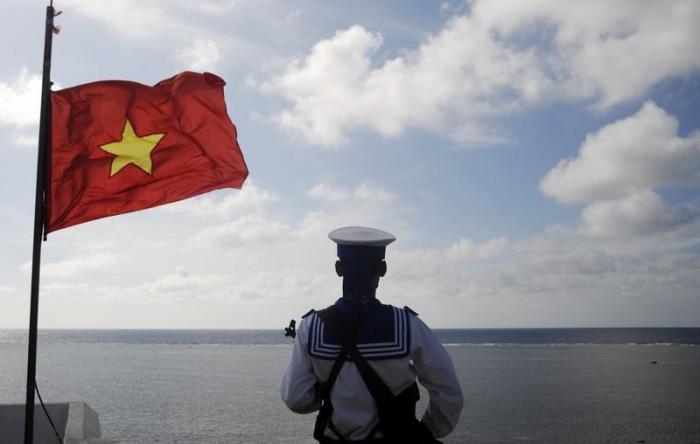 PHUKET: Vietnam said on Wednesday a Chinese vessel intentionally rammed two of its ships in a part of the disputed South China Sea where Beijing has deployed a giant oil rig, sending tensions spiralling in the region.

“Chinese ships, with air support, sought to intimidate Vietnamese vessels. Water cannon was used,” he told a news conference in Hanoi. Six other ships were also hit, other officials said, but not as badly.

Dozens of navy and coastguard vessels from both countries are in the area where China has deployed the giant rig, Vietnamese officials have said.

“No shots have been fired yet,” said a Vietnamese navy official, who could not be identified because he was not authorised to speak to media. “Vietnam won’t fire unless China fires first.”

The tensions between the two Communist nations come as both are trying to put aside border disputes and the memories of a brief border war in 1979. Vietnam is usually careful about public comments against China, with which it had bilateral trade surpassing $50 billion in 2013.

However, Hanoi has strongly condemned the operation of the drilling rig in what it says are its waters in the South China Sea, and told China’s state-run oil company CNOOC to remove it.

The United States has also criticised the move.

The row comes days after U.S. President Barack Obama visited Asia to underline his commitment to allies there, including Japan and the Philippines, both locked in territorial disputes with China.

Obama, promoting a strategic “pivot” towards the Asia-Pacific region, also visited South Korea and Malaysia, but not China.

The United States is “strongly concerned about dangerous conduct and intimidation by vessels in the disputed area,” U.S. State Department spokeswoman Jen Psaki said In Washington on Wednesday.

Psaki reiterated the U.S. view that China’s deployment of an oil rig was “provocative and unhelpful” to regional security.

“We call on all parties to conduct themselves in a safe and appropriate manner, exercise restraint, and address competing sovereignty claims peacefully, diplomatically, and in accordance with international law,” she told a regular news briefing.

China has not yet responded to the Vietnamese allegations of ramming, but Foreign Ministry spokeswoman Hua Chunying said earlier on Wednesday that the deployment of the rig had nothing to do with the United States, or Vietnam.

“The United States has no right to complain about China’s activities within the scope of its own sovereignty,” she said.

Tensions are also brewing in another part of the South China Sea where Beijing has demanded the Philippines release a Chinese fishing boat and its crew seized on Tuesday.

Chief Superintendent Noel Vargas of the Philippine National Police Maritime Group said a maritime police patrol apprehended a Chinese fishing boat around 7 a.m. on Tuesday off Half Moon Shoal in the Spratly Islands.

The boat has 11 crew and police found about 350 turtles in the vessel, some of which were already dead, a police report said, adding that a Philippine boat with crew was also seized, and found to have 70 turtles on board. Several species of sea turtles are protected under Philippine law.

Maritime police are now towing the boats to Puerto Princesa town on the island of Palawan where appropriate charges will be filed against them, Vargas said.

China said the Philippines had to release the boat and the fishermen.

“China’s Foreign Ministry and China’s ambassador to the Philippines have made representations to the Philippine side, demanding that it provide a rational explanation and immediately release the people and the vessel,” ministry spokeswoman Hua said.

“We once again warn the Philippines not to take any provocative actions,” she said, adding that China had “indisputable sovereignty” over the Spratly Islands.

The State Department’s Psaki also said the United States had seen reports about the boat seizures and added: “We urge both sides to work together diplomatically.”

She said Washington was concerned that the vessels appeared to be engaged in catching endangered sea turtles.

There are frequent tensions in the South China Sea between China and the other claimant nations, particularly Vietnam and the Philippines, both of which say Beijing has harassed their ships in the waters there.

While there are frequent stand-offs between fishermen and the various claimant states in the South China Sea, the actual detention of Chinese fishermen or the seizure of a boat is rare.

An oil industry official in China said the deployment of the rig owned by China’s CNOOC oil company to waters near Vietnam appeared to be a political decision rather than a commercial one.

“This reflected the will of the central government and is also related to the U.S. strategy on Asia,” said the official, who spoke on condition of anonymity.

“It is not commercially driven. It is also not like CNOOC has set a big exploration blueprint for the region.”

However, Wu Shicun, president of the National Institute for South China Sea Studies, a government think tank in the southern province of Hainan, said China was unlikely to pay much heed to Vietnamese concerns.

“If we stop our work there as soon as Vietnam shouts, China will not be able to achieve anything in the South China Sea,” Wu said.

“We have lost a precious opportunity to drill for oil and gas in the Spratlys. Also this time we are drilling in Xisha (Paracel Islands), not Nansha (Spratlys), there is no territorial dispute there. I think China will keep moving ahead with its plan (in Xisha), no matter what Vietnam says and does.”

“We cannot exclude any measures, including international legal action, as long as it is peaceful.

“We are a peace-loving nation that has experienced many wars,” he said. “If this situation goes too far, we will use all measures in line with international law to protect our territory. We have limitations, but we will stand up to any Chinese aggression.”

The Philippines has already taken its dispute with China to an international arbitration tribunal in The Hague.