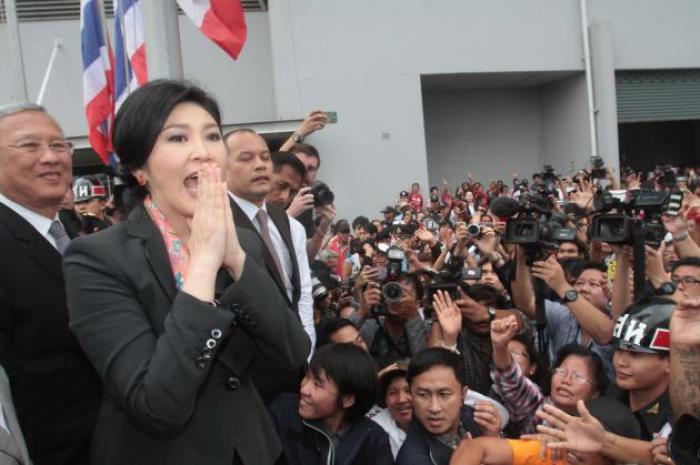 The dismissal followed a Constitutional Court ruling that she had violated the charter by unlawfully transferring a security tzar shortly after she came to power.

Yingluck was the third prime minister of fugitive ex-premier Thaksin Shinawatra’s camp to be disqualified from office by the Constitutional Court. First, it was the late Samak Sundaravej, followed by Somchai Wongsawat.

The younger sister of Thaksin became prime minister after she had been introduced to politics as Pheu Thai Party candidate only 46 days before elections.

Her brother Thaksin had been sentenced to two years in jail by the Supreme Court’s Criminal Division for Persons Holding Political Positions for abuse of power in 2008.

He has been living in self-exile abroad but is widely believed to have been pulling strings in support of his sister.

Political observers said Yingluck was the right choice for Thaksin as prime ministerial candidate for his Pheu Thai Party in the 2011 election. Together with Thaksin’s populist policies, which received strong support from the North and Northeast, the friendly and photogenic Yingluck led the party to a clear victory in the July 3 election.

Yingluck graduated from Chiang Mai University with a degree in political science and went on to earn a master’s in the same subject from Kentucky State University in the United States. However, she had never run for office or held a government post before the election. She previously pursued a corporate career, formerly as managing director of AIS, the telecommunications firm her brother founded, and as managing director of SC Asset Co, a family firm involved in property.

Yingluck is married to Anusorn Amornchat, managing director of M Link AsiaCorp, another Shinawatra family-owned firm. The couple has one son Supasek.

During the 2011 political campaign, Thaksin described Yingluck as his”clone”. However, Yingluck, who is 18 years younger than her brother, always denied being influenced by him and vowed to work independently.

“I will be myself,” she told reporters before the election.

The political lightweight survived the first year in office against all odds. The most biting remark welcoming Yingluck into her second year came from Democrat Korn Chatikavanij. “I give her 10 out of 10 for meeting all my expectations,” he quipped, clarifying that he had had a clear idea of whose interests she would be representing and how she would do it.

A former Pheu Thai adviser, without the sarcasm of Korn, agreed with the Democrat. “She has been like a hollow woman, and that helps [Pheu Thai’s agenda],” the source said. “When the person who is supposed to be the biggest target is overlooked or cannot be seen, difficult things can be easy.”

In her second year, Yingluck was seen to establish cordial ties with the military when she was appointed the first female defence minister in 2013. Thaksin is widely known as an opponent of Privy Council President Prem Tinsulanonda, who has much influence among the military.

But things unravelled when her Pheu Thai MPs tried to pass an amnesty bill in October, which would have enabled Thaksin to return a free man. Since last November, her government has faced intense protests from the People’s Democratic Reform Committee (PDRC).

During the rallies, there were reports that Yingluck almost gave in to the resignation demands of the protesters. She changed her mind at the last minute as Thaksin called up and told her to stay on and push for the February 2 election.

Politics eventually taught her a tough lesson. From a political novice, the businesswoman turned into a real politician and learned well how to react and to handle pressure.

“I’m ready to die on the democratic battlefield,” the 46-year-old former prime minister once responded to a demand for her to resign and pave the way for a non-elected prime minister.

Yingluck has also been charged by the National Anti-Corruption Commission (NACC) with neglect of duty in connection with the costly rice-subsidy scheme.

The NACC will decide whether to indict Yingluck today at the earliest, and by May 15 at the latest.

If indicted, Yingluck will face an impeachment vote in the Senate, which could lead to a five-year ban from politics and other criminal charges.

On her last day as premier, Yingluck made her final national address.

“From now on, whatever status I’ll hold, I will move forward in accordance with democracy and rule of law, and stand by the Thai people forever.”

Doubts remain over whether she will run in the next election as the court’s ruling yesterday did not ban her from politics.

Govt to push ahead with poll
The Nation / Phuket Gazette

PHUKET: Interim Prime Minister Niwattumrong Boonsongpaisan said yesterday that he will ensure the upcoming general election can proceed uninterrupted after Yingluck Shinawatra was dismissed yesterday as PM by the Constitutional Court for abuse of power.

“I will also take care of the people and the economy,” he added.

The court ruled unanimously that Yingluck and nine 2011 Cabinet members had abused their power to remove Thawil Pliensri as secretary-general of the National Security Council in the interest of her family.

Niwattumrong was qualified to take the job as he ranked second in seniority to Surapong Tovichakchaikul, who was also discharged, said Prompong Nopparit, spokesman for the ruling Pheu Thai Party.

“Niwattumrong is capable and experienced, as he has served the administration for a long time. He will be able to coordinate all parties for the benefit of the people,” he said.

Yingluck had been in office for two years, nine months and two days since her Pheu Thai Party won the 2011 election. Her victory displeased the elite and urban middle class, which decided she was merely a clone of Thaksin, her elder brother, who was deposed by a military coup in 2006.

Her attempt through an amnesty bill to engineer a pardon for Thaksin, who was sentenced to prison, sparked a series of mass protests in Bangkok led by the opposition ally People’s Democratic Reform Committee (PDRC).

In a statement after the charter court’s judgement, Yingluck said she was proud of performing the duty of prime minister for the past years. Her regret was not having a chance to serve the country and the people any more.

“We have served the country honestly and fairly. We’ve never acted in corrupt ways as we were accused, or shown favouritism towards anyone. We have not acted against constitutional laws as accused,” she said.

The court’s verdict was considered by the ruling party as part of a conspiracy to topple Thaksin’s associates from power.

Senator Paiboon Nititawan, who filed the petition against Yingluck, praised the verdict and demanded that the remaining ministers in the Cabinet step down, claiming they no longer had any legitimacy. The appointed senator wanted the entire Yingluck cabinet to step aside so that the Senate could appoint a n