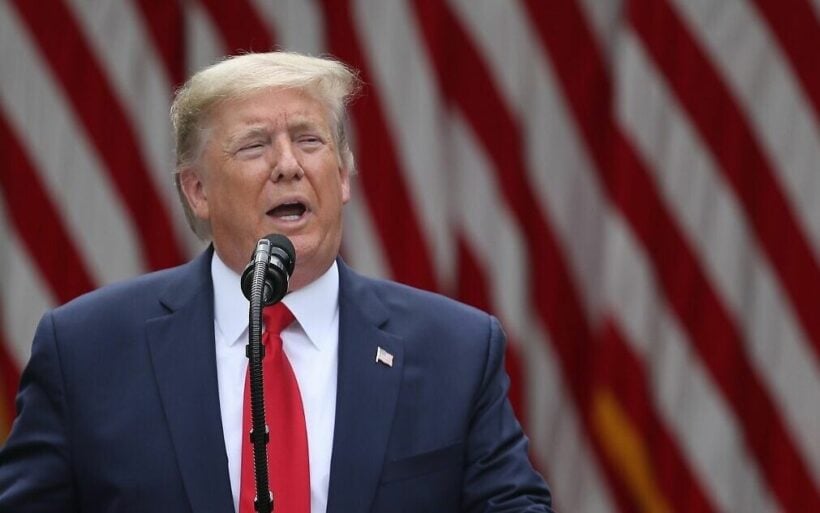 And that was all in just one media conference in the rose garden at the White House by US President Trump. The President, without even mentioning the Covid-19 crisis or the overnight violence in numerous US cities, launched a blistering attack on the Chinese government. He listed a litany of “misdeeds” that ranged from the violation of Hong Kong’s freedoms, espionage, and announced an unspecific inventory of retaliatory measures.

The invective will plunge US-China relations into the deepest crisis since relations resumed between the two nations in the 1970s, led by President Nixon. Two years of carefully curated trade negations are now in tatters between the two countries.

“They’ve ripped off the United States like no one has ever done before. Beijing has raided our factories and gutted American industry.”

The US President cast Beijing as a central foil he will use as a platform in the remaining months of his re-election campaign for the Presidential elections in November. He painted Beijing as an existential geopolitical threat. His strong rhetoric is a gamble that will rattle world trade and diplomatic relations whilst the world struggles to emerge from the global Covid-19 pandemic.

Just the night before, massive protests roiled the US cities of Minneapolis and Atlanta after the death, in police custody, of an African American man, but Mr. Trump made no mention of the incidents that have become an incendiary distraction from the country’s struggles with Covid-19.

President Trump called out China for “espionage to steal our industrial secrets, of which there are many,” and accused Beijing of “unlawfully claiming territory in the Pacific Ocean” and threatening freedom of navigation. He blasted the Chinese government for passing a national security law that he claimed would undermine Hong Kong’s autonomy.

“Going forward the US will no longer grant Hong Kong special status on trade or in other areas and instead will apply the same restrictions to the territory it has in place with China.”

His statement would strip Hong Kong of special conditions relating to extradition, trade, travel and customs the US had previously granted it. The proposed sanctions would have a profound effect on trade and travel between Hong Kong and US citizens and businesses.

But, wait, there’s more. He then announced the US will pull out of the World Health Organisation even as the Covid-19 pandemic continues to spread across the globe, most notably in his home country. President Trump claimed that China has “total control” over the WHO and its 194 nation states.

He also claimed that China had pressured the WHO to “mislead the world” over the origins of the coronavirus pandemic, calling it the “Wuhan virus”.

“Health funding would be redirected to other worldwide and deserving, urgent global public health needs.”

“Hong Kong is no longer sufficiently autonomous to warrant the special treatment that we have afforded the territory.”

He said his administration would begin the process of eliminating policy exemptions that give Hong Kong different and special treatment, including extradition treaties, export controls on dual-use technologies.

“The US will also revoke Hong Kong’s preferential customs and travel status.”

In reality, the steps would have very little immediate financial impact. In 2019, the US imported less than $5 billion of goods from Hong Kong that President Trump could hit with new tariffs. But, in comparison, the US exports over $30 billion a year to Hong Kong.

At this stage there has been no official response from the Chinese government which will likely take the weekend to digest the gravity and extent of the US President’s statements.

President Trump is also widely expected to announce a restriction on Chinese students. About 350,000 visit the US to study each year paying high fees to United States universities. Joint scientific research between the two nations is also expected to be scrapped.

Shortly after the press conference the White House then issued a presidential proclamation suspending US entry for Chinese graduate and postgraduate students and researchers that takes effect at noon on Monday.

The proclamation claimed that authorities in the People’s Republic of China “use some Chinese students, mostly post graduate students and post-doctorate researchers, to operate as non-traditional collectors of intellectual property. These students are at high risk of being exploited or co-opted by the PRC authorities and provide particular cause for concern.”

Meanwhile, Twitter doubled down in an escalating row with the President, saying tweets he made at the height of the overnight violence in ,Minneapolis which implied that protesters in the city could be shot, “glorified violence”, the first time it had applied such warnings to any public figure’s posts.

The highly public to-and-fro between President Trump and Twitter punctuated a week of conflict between the outspoken President and the loudspeaker itself. On Wednesday he accused Twitter of “stifling free speech” saying he would “not allow the social media companies to operate unfettered”.

In an act of retaliation, he signed the executive order on Thursday taking aim at Section 230 of the Communications Decency Act, which provides the liability shield to the tech companies. It is unclear if this blunt tool can be enacted and could be unconstitutional.