The US President Donald Trump has again repeated unproven and outlandish claims that widespread voter fraud has marred the US presidential election. In a handful of crucial states the results are too close to call as votes continue to be counted.

Speaking at the White House, the President was defiant, accusing pollsters and the Democratic Party of engaging in fraud. It’s a theme he’s been pounding throughout the week on his Twitter account. Twitter have responded by labelling his tweets as “disputed” or “misleading”.

“If you count the legal votes, I easily win. If ‘illegal votes’ are counted, they can try to steal the election from us.

The President, in measured tones, didn’t provide any evidence or clarification of his claims of fraud, whilst continuing to strip the reputation of the US electoral and voting system. It was first time the Republican leader addressed the nation since election night.

Currently, Joe Biden is projected to have won 264 electoral votes, Donald Trump 214… both need 270 Electoral College votes to become the next US President.

Alaska, Georgia, Nevada, North Carolina and Pennsylvania are still counting ballots and winners have not been projected in those states. Arizona has been projected for Biden, but officials say mail-in ballots are still being counted and his lead dwindling as later votes are counted.

Meanwhile a small number of protesters have taken to the streets in some of the more contested electorates. In Philadelphia dozens of people gathered , shouting “Count every vote”, singing to Marvin Gaye outside the city’s convention centre where election staff continue to scan ballots. Across the road, separated by police, supporters of President Trump waved signs at a second rally.

Despite a lead to Donald Trump of just over 60,000 votes in Pennsylvania, the mood among Joe Biden’s supporters was optimistic, as the Democratic candidate continues to dramatically narrow the race. The same situation exists in the state of Georgia where the President’s lead has shrunk down to around 3,500 votes (as of 8am Thai time).

The opposite situation exists in Arizona where the latest count shows the President cutting into Joe Biden’s lead.

There is still no way to predict a final result although both camps are saying they’re optimistic to be first to reach the 270 Electoral College votes.

Joe Biden reiterated his call for patience in a sober tweet – in stark contradiction to Trump, who has been raging about election fraud. 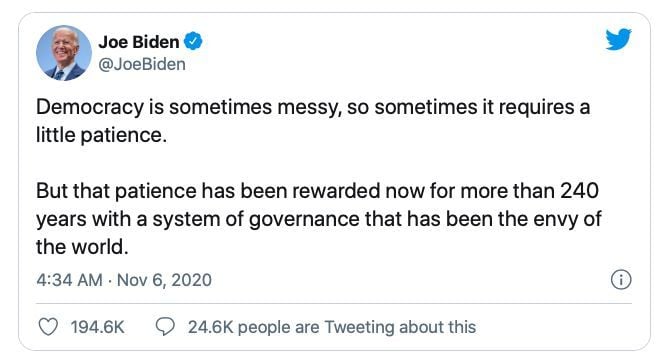 Trump’s campaign has pursued legal efforts to halt the vote counting in some states and is seeking a recount in Wisconsin. At this stage local courts have rejected or thrown out a number of legal challenges from members of the Trump campaign team.

Biden says that “the process is working” and “we’ll know very soon” the outcome of the election.