Former vice president Joe Biden currently sits at 264 electoral votes, in the race for the magic ‘270’ vote finish line. He’s also ahead in the count, by slim margins, in the battleground states Pennsylvania, Georgia and Nevada. If any one of those states gets called in his favour, he will pass the 270 electoral votes to become president (if he maintains his lead in Arizona). Whilst some sort of last minute mathematical miracle could still award these states to President Donald Trump, election pundits are saying, on the contrary, the latest vote counts are adding more to Joe Biden’s tally.

Tonight, on US primetime TV, VP candidate Kamala Harris will speak before Mr. Biden in an open address. Although uncustomary for the a vice presidential candidate to speak at this time, Harris is shaping up to be the first woman and first Black vice president in US history. There has been little comment out of the Trump campaign on Friday with no appearance from the President on the cards this evening, US time.

Yesterday Joe Biden called for his supporters to remain calm saying that his campaign has “no doubt that when the count is finished Sen. Harris and I will be declared the winners.”

Meanwhile, incumbent President Trump made it clear in a series of tweets on Friday, US time, that he intends to take the count to the courts as his best option to winning reelection. Hi campaign team has filed a number of suits in battleground states demanding the vote count be stopped and declaring him the winner in the states. All of these suits have been treated as vexatious litigation up to date and been thrown out by the local courts up to date. 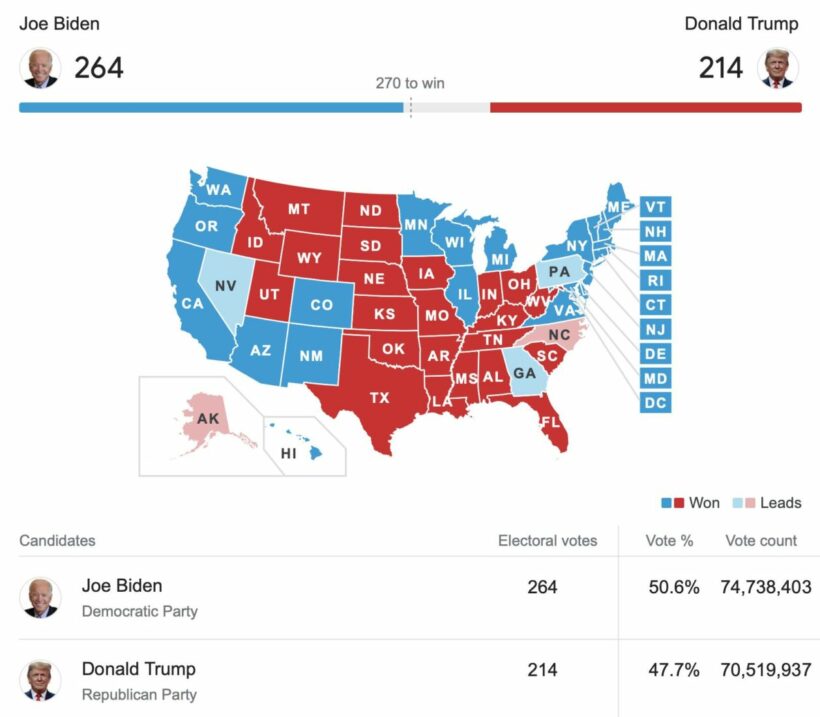 Rachael Cobb, a lawyer from Suffolk University, says the Trump campaign is just “throwing a lot of stuff at the wall.”

But a Trump tweet remained defiant… “I had such a big lead in all of these states late into election night, only to see the leads miraculously disappear as the days went by. Perhaps these leads will return as our legal proceedings move forward!”

President Trump jumped out to an early lead in Pennsylvania, Michigan, Georgia and other key states on Election Day because officials counted in-person, day-of votes first, as is the usual procedure in counting booths. Those votes favoured Donald Trump. Counters then turned to the record number of mail-in ballots, the higher proportion ever due to fears of the current coronavirus pandemic sweeping the US. Those votes mostly favoured Joe Biden, and saw the former VP draw closer, level, and then pull ahead of the President in key states.

The opposite has been true in Arizona where late counting has favoured the Trump team, although they are still behind in that state.

Joe Biden added another 8,000 votes to his lead over President Donald Trump in Nevada. State election officials yesterday (Thai time) started releasing some 51,000 late-arriving mail-in ballots. Biden won an average of 66% of the first batch of around 30,000 votes, extending his lead over Trump to 22,000.

As it stands, if Biden wins Nevada and Arizona, OR just Pennsylvania, his will pass the 270 electoral votes necessary. At the moment he is leading in all 3 battleground states. He also appears to have Georgia in his grasp now, although it is likely that there will be a re-count of votes called due to the close nature, less than 0.5% of all votes, in that state.

Votes cast are likely to hit a 120 year high by the time the dust settles. As the final ballots are counted, the voter turnout could eventually reach more than 66%, the eligible voters, higher than the previous records of 1980 and 2008. In the US, voting is not compulsory.

This posted at 11am, Thai time…