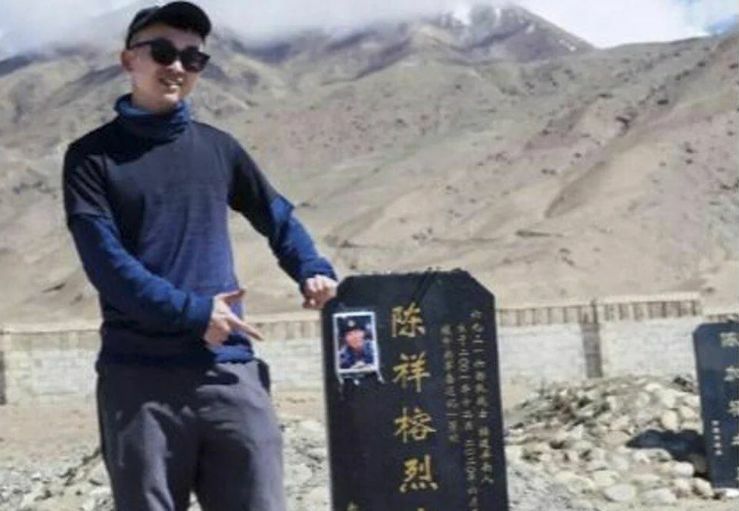 A travel blogger in China was sentenced to seven months in prison after publishing photos of himself with a veteran’s tombstone at a military cemetery in Xinjiang territory, according to the state media People’s Daily. Li Qixian, who blogged under the name Xiao Xian Jayson, was ordered him to make a public apology within 10 days.

Li visited the Kangxiwa Martyrs’ Cemetery in northwest China and uploaded nine images on local social media sites WeChat and Xiaohongshu in July. He typed the Chinese characters for “respect” under the photos.

However, two of the photographs garnered considerable condemnation online, with many believing Li showed little regard for the veterans buried in the cemetery of about 100 soldiers, including a soldier who died in a fight on the Indian border last year, which immediately sparked indignation.

In one picture, Li was seen wearing a cap and sunglasses and smiling casually, one hand on the gravestone and the other in a move that many mistook for pointing a gun at the grave. He was reclining on a stone with the cemetery’s name, one hand in his pocket and the other resting on his hat in another.

The newspaper reported on Monday that Li had been sentenced to seven months in prison and had been ordered to make a public apology within 10 days by the Pishan County People’s Court in Xinjiang. It did not specify when the punishment was issued.

Li was not the only blogger in China to face public outrage for their actions while on the road. Earlier in July, the online celebrity known as Witty Dang Sister apologised after internet users were offended by a video in which she was seen dancing in front of the Lushun Museum in Dalian while dressed in a Lolita attire, a subculture from Japan. The museum, which dates from the 1910s, is dedicated to the Japanese army invasion of China prior to and during World War II.

MARCO
On 11/17/2021 at 8:49 PM, HolyCowCm said: You seem to know a lot about America but little about the world or perhaps just trolling, or do you actually love the CCP and XI. Yeah there are some Americans who are…
MARCO
On 11/17/2021 at 7:50 PM, HolyCowCm said: Well funny how I just came across an article that says the CCP just yesterday sent bombers to the Indian border as a big commie warning to the Indians. The CCP is egging…
HolyCowCm
3 hours ago, MARCO said: Well the Indians should be afraid of the Commies...... very afraid. Look what they did to the USA, apparently the most powerful country in the world. Korea ended up a stalemate. Cuba's Bay of Pigs…
HolyCowCm
1 hour ago, HolyCowCm said: Hi MARCO... where are you from? Marco is Italy or are you just galivanting masquerading? We all should be afraid of nuclear missiles and then the world for the fallout after that. The CCP's and…
MARCO
9 hours ago, HolyCowCm said: Ok. I love you the same as everybody, We are the same.. OK Holycow. Let's agree to disagree. But let me say that in my opinion both the CCP and USA both have many faults…