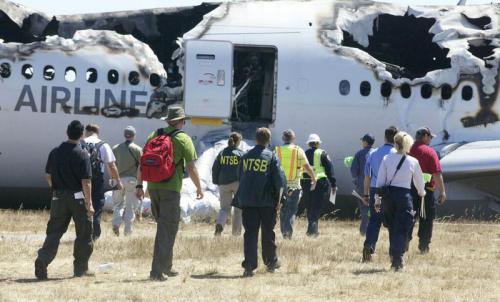 The aircraft was travelling “significantly below” its intended speed and its crew tried to abort the landing just seconds before it hit the seawall in front of the runway, the U.S. National Transportation Safety Board said on Sunday.

Information collected from the plane’s cockpit voice recorder and flight data recorder indicated that there were no signs of trouble until seven seconds before impact, when the crew tried to accelerate, NTSB Chairwoman Deborah Hersman said at a news conference at the airport.

A stall warning sounded four seconds before impact, and the crew tried to abort the landing and initiate what’s known as a “go around” manoeuvre just 1.5 seconds before crashing, Hersman said.

“Air speed was significantly below the target airspeed,” she said.

Chinese student may have been run over by emergency vehicle

An emergency vehicle rushing to the scene of the crash may have run over one of the two teenage Chinese girls killed in the incident, the local fire department said on Sunday.

San Francisco’s medical examiner is now conducting an autopsy to determine the cause of the girl’s death, fire department spokeswoman Mindy Talmadge said.

“One of the deceased did have injuries consistent with those of having been run over by a vehicle,” Talmadge said. “Many agencies were on the field yesterday.”

Hersman said it was too early to speculate on the cause of the crash. The data recorders corroborated witness accounts and an amateur video, obtained by CNN, that indicated the plane came in too low, lifted its nose in an attempt to gain altitude, and then bounced along the tarmac after the rear of the aircraft hit a seawall at the approach to the runway.

Too early to determine cause of crash

Asked whether the information reviewed by the NTSB showed pilot error in the crash, Hersman did not answer directly.

“What I will tell you is that the NTSB conducts very thorough investigations. We will not reach a determination of probable cause in the first few days that we’re on an accident scene,” she told reporters.

Asiana said mechanical failure did not appear to be a factor in the crash. Hersman confirmed that a part of the airport’s instrument-landing system was offline on Saturday but cautioned against drawing conclusions from that, noting that the so-called glide slope system was not essential to safe operations in good weather. She said it was a clear day with good visibility.

At least five people were still being treated at other area hospitals on Sunday morning.

Some of the injured at San Francisco General suffered spinal fractures, including paralysis, and others sustained head trauma and abdominal injuries, according to Margaret Knudson, chief of surgery at the hospital.

At least two patients also suffered “severe road rash suggesting they were dragged,” Knudson said. The injured patients who were able to talk said they were all sitting in the back of the plane, Knudson said.

The plane was coming in from Seoul when witnesses said its tail appeared to hit the approach area of a runway that juts into San Francisco Bay.

The impact knocked off the plane’s tail and the aircraft appeared to bounce violently, scattering a trail of debris and spinning before coming to rest on the tarmac.

Benjamin Levy, a 39-year-old venture capitalist from San Francisco who sat in a window seat near one of the wings, said the flight crew gave “no indication whatsoever” that there was any problem with the landing moments before the aircraft struck the runway.

Following the initial collision, “we’re going back up and I’m thinking maybe we’re taking off again. We didn’t and we went back pretty hard and bounced,” he told reporters after being released from San Francisco General.

“It’s like a Six Flags show,” he said, referring to a theme park. “We were skipping on the runway.”

Pictures taken by survivors showed passengers hurrying out of the wrecked plane, some on evacuation slides. Thick smoke billowed from the fuselage and TV footage later showed the aircraft gutted and blackened by fire. Much of its roof was gone.

Interior damage to the plane also was extreme, Hersman said on CNN.

“You can see the devastation from the outside of the aircraft, the burn-through, the damage to the external fuselage,” she said. “But what you can’t see is the damage internally. That is really striking.”

The dead were identified as Ye Meng Yuan and Wang Lin Jia, both 16-year-old girls and described as Chinese nationals who are students, Asiana Airlines said. They had been seated at the rear of the aircraft, according to government officials in Seoul and Asiana, and were found outside the airplane.

“For now, we acknowledge that there were no problems caused by the 777-200 plane or (its) engines,” Yoon Young-doo, the president and CEO of the airline, told reporters on Sunday at the company headquarters on the outskirts of Seoul.

Asiana on Sunday said the flight, which originated in Shanghai, had carried 291 passengers and 16 crew members. The passengers included 141 Chinese, 77 South Koreans, 64 U.S. citizens, three Indians, three Canadians, one French, one Vietnamese and one Japanese citizen.

Vedpal Singh, a native of India, was on board the flight along with his wife and son when the aircraft struck the landing strip.

“Your instincts take over. You don’t know what’s going on,” said Singh, who had his arm in a sling as he walked through the airport’s international terminal and told reporters he had suffered a fractured collar bone.

Asiana, South Korea’s junior carrier, has had two other fatal crashes in its 25-year history.

A senior Asiana official said the pilot was Lee Jeong-min, a veteran pilot who has spent his career with the airline. He was among four pilots on the plane who rotated on two-person shifts during the 10-hour flight, the official said.

Liu was formally charged in April with abuse of power, taking bribes and malpractice, conduct that led to “huge losses” of public assets, state media said when his trial began at a Beijing court