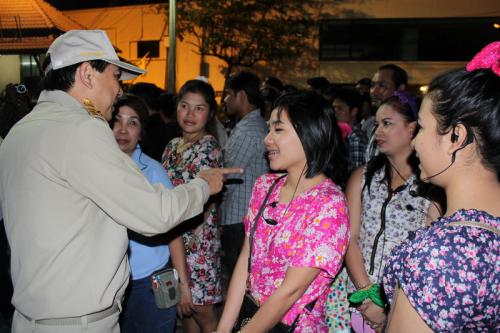 PHUKET: In a mass show of police strength, more than 300 officers gathered in Phuket’s famed red-light district of Soi Bangla in Patong on Saturday night in the government’s latest campaign to bolster tourist safety on the island.

Led by Phuket Governor Maitri Inthusut, the officers patrolled the bars with an eye to keeping the peace, on the lookout for any troublemakers.

“Tourists need to have confidence that Phuket is a safe place, so we are staging raids from July 1 to July 15 to boost security,” Governor Maitri said.

“The Thai Government wants to increase revenue from tourism, and Phuket is among the top five tourist destinations in Thailand, along with Bangkok, Chiang Mai, Pattaya and Samui,” he said.

The show of 300 on Saturday followed 100 officers staging similar raids on Friday that netted at least seven suspects who failed on-the-spot urine tests.

Patong Police Superintendent Chiraphat Pochanaphan separated the officers into four teams. The officers set up a drug-test checkpoint on the beach road and raided nightclubs, internet cafes and karaoke bars.

“Our focus is on drugs, illegal workers and children under 18 years old working in nightclubs,” Col Chiraphat explained.

“Three were at a nightclub on Soi Bangla, and four were at a karaoke bar on Phang Muang Sai Kor Road,” he confirmed.

“We are conducting tests on any people we suspect of using drugs, whether they be motorists driving down the road or people partying in a nightclub,” he said.

“We are also checking work permits and passports of foreigners,” he added.

“It doesn’t matter whether it’s the low season or not, every season must be safe for tourists,” he said, “especially since the number of tourists is rising.”

Governor Maitri pointed out that from January to June this year, tourist arrivals were up 19 per cent over last year.