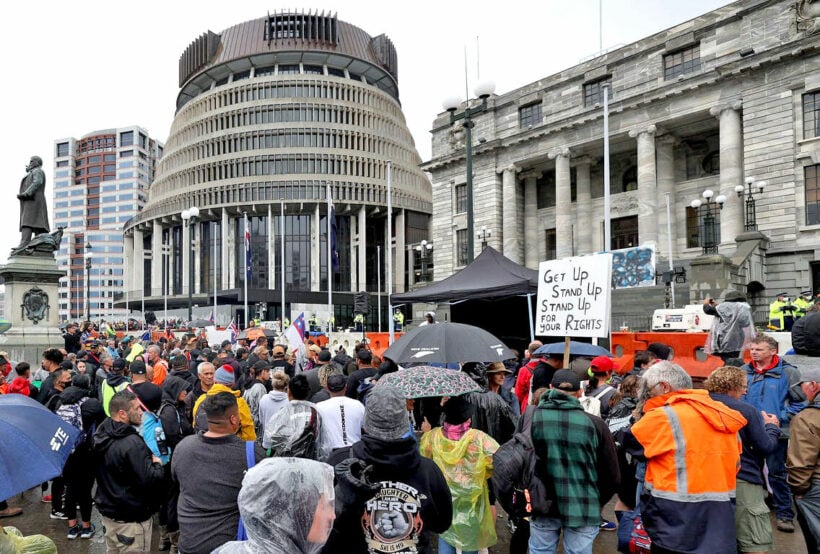 Truck protests are spreading as fast as Omicron itself. The protests are variously against vaccine mandates, ongoing Covid-related restrictions and face masks. They are certainly helping to galvanise a weary global electorate after 2 years of lockdowns and precautionary mandates. But even the Canadians haven’t stooped to the sheer terror inflicted on NZ truckies and other protesters who have gathered outside the NZ parliament in Wellington.

Starting with the ‘Freedom Convoy’ in Quebec, Canada, the idea of blocking streets and important truck trade routes is becoming an international phenomenon. There are now similar protests in Paris, Bangkok, Canada and, now, Wellington in New Zealand.

But NZ authorities have found a new and vicious weapon to use against the truckers – Barry Manilow. At least a loud and repeated playlist of his hits on a 15 minute rotation blasted out at high volume. They’ve also thrown in the dance hit ‘Macarena’ to mix it up with ‘Mandy’ and ‘Could It Be Magic’ to help repel the truck rallies.

In response the truckies are firing back with their own musical weapon, Twisted Sister and “were not going to take it’.

Whilst the NZ authorities are resisting rolling out their riot police and squads of uniformed policeman to move on the protests, they unleashed the raw power of a Barry Manilow power ballad to do the hard work for them.

It seems Barry’s big songs weren’t as big a deterrent as they were hoping (some Manilow fanboys in the ranks of New Zealand’s truck driving fraternity?), so Parliamentary speaker Trevor Mallard got the police to activate the sprinklers to help “dampen” the protests in Wellington.

But the protesters merely dug their own trenches and rerouted the irrigation systems (Barry did do a rendition of ‘Bridge Over Troubled Waters’ which could have complimented slo-mo video of the truckers in their wet T-Shirts frolicking under the sprinklers, but no…).

Instead the protesters trucked in bales of hay to soak up the water. Mr. Ballard also took responsibility for the heavy-handed and brutal use of the Manilow ballads.

So if Barry Manilow can’t deter these persistent truck protests, WHAT possibly could?

The protest, inspired by the Canada truck convoys and protests, started last Tuesday, but the numbers waned as the week progressed.

Last Thursday NZ police arrested 122 people, charging many of them with trespassing or obstruction.

But numbers have picked up over the weekend again (presumably BYO ear plugs).

According to the NZ Herald, among the protesters’ grievances is the requirement in NZ that some workers must be vaccinated against Covid-19, including teachers, doctors, nurses, police and military personnel.

New Zealand has been spared the worst of global Covid pandemic after it closed its borders early, implemented strict lockdowns, and has maintained an ‘almost’ zero-Covid policy to limit the spread of the virus.

The southern nation has reported only 53 Covid-related deaths among its population of 5 million.

As Barry Manilow once said of his own music… “I think my music is like anchovies – some people like it, some people get nauseous.”

The NZ parliamentary speaker is said to be considering turning to the works of Micheal Bolton in an effort to repel the Wellington truck protest. The Thaiger may have made up the last bit.

AlexPTY
Usually, Nickelback is used, but Australia always has a weird taste
Paulw
On 2/13/2022 at 3:16 PM, Giltee said: Finally the sheeple of New Zealand are waking up to their socialist PM. The only thing she’s done is keep covid out of NZ and that’s largely been luck because of its isolation.…

King Cotton
On 2/13/2022 at 3:16 PM, Giltee said: Finally the sheeple of New Zealand are waking up to their socialist PM. The only thing she’s done is keep covid out of NZ and that’s largely been luck because of its isolation.…

Thaidup
Fancy protesting for peoples choice, vs a government mandate. What has the world come to? Barry Manilow may be better off played out infront of shopfronts at 1am with Celine Dion on loop to curb graffitti vandalism. 😀