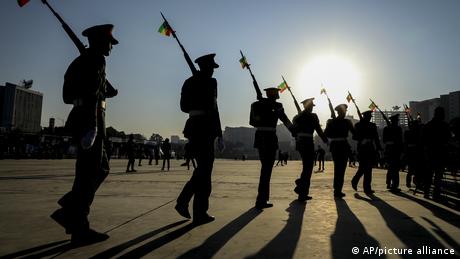 “We are watching and securing the peace of the neighborhood,” member Leul Hassen told AP news agency.

Vigilante groups like this are accused of stopping people and turning Tigrayans, one of Ethiopia’s more than 80 ethnic groups, over to the police.

Tens of thousands of Tigrayans have been rounded up and interred in crowded, unsanitary camps since the conflict began, rights groups report.

Arbitrary detentions have intensified since November when Prime Minister Abiy Ahmed introduced a state of emergency and called for citizens to take up arms against Tigray fighters and their allies, the Oromo Liberation Army (OLA).

Rights groups and the United Nations have recorded wide-ranging ethnically motivated atrocities — from plundering and torture to massacres and gang-rapes — carried out by all parties involved in the Tigray conflict, including Ethiopian federal forces, Eritrea’s Defense Force, Amhara special forces and TPLF fighters.

Ethiopia, a fragile federation of 11 ethnically based territories, is also seeing outbursts of ethnic violence in regions not directly affected by the Tigray war.

In a flare up of a boundary dispute between Ethiopia’s Afar and Somali regions, some 100 civilians, many of them Afar herders, were killed in April, reportedly by Somali regional forces.

In the east of the Oromia region, dozens of ethnic Amhara farming families were killed in a spate of attacks, allegedly carried out by the OLA in February and March.

The spiraling ethnic conflicts is stoking fears that Ethiopia could violently disintegrate.

If the fighting reached Addis Ababa and unleashes communal violence across Ethiopia, United Nations aid chief Martin Griffiths said last week, “we’re facing something I don’t think we have faced before for many, many years: We’re facing a fracture … of the fabric of Ethiopia.”

For US-based Horn of Africa analyst Yohannes Woldemariam, who grew up in Ethiopia, that isn’t a far fetched scenario.

“The level of hatred and the level of polarization is so intense, the situation is so violent and so divided along ethnic sectarian lines that the idea of a unitary Ethiopia surviving seems very difficult to imagine,” Woldemariam told DW.

Abiy came to power in 2018 on the back of widespread protests, especially by ethnic Oromos.

They initially had high hopes of Abiy because of his mixed Oromo-Amharic parentage.

But the Oromos, the nation’s largest ethnic group who make up some 35% of Ethiopia’s population, now feel neglected by Abiy, who is seen as aligning himself with Amhara elites.

“They [the Oromo] do not trust Abiy,” Woldemariam said. “They feel Abiy has betrayed those that helped propel him to power.”

Even before the Tigray conflict, Abiy deployed troops to Oromia to silence those opposed to his idea of unified Ethiopia, with soldiers accused of committing an array of abuses against Oromo civilians.

It’s against this background that militarized wing of the Oromo, the OLA, has taken up arms in alliance with Tigrayan fighters against Abiy.

As for the TPLF, they were generally despised before the conflict broke out thanks to the corruption and repression of the TPLF-led coalition that dominated Ethiopia’s politics for the 27 years before Abiy’s appointment.

They were even “unpopular” in Tigray because “the TPLF elite were really just pursuing their own wealth and their own lives,” Woldemariam told DW.

“This changed when [the federal government] began to persecute Tigrayans just for being Tigrayans,” Woldemariam said. “Now just about every Tigrayan from every walk of life is [backing the TPLF] because there is a sense that they are being hunted by Abiy Ahmed and his Prosperity Party.”

Atlantic Council researcher Cameron Hudson, a former diplomat in the Horn of Africa region, agrees with this analysis.

“Abiy’s use of hate speech, calling Tigrayans ‘terrorists’ and ‘weeds that need to be pulled’ has only served to drive the Tigrayan people, who had real doubts about their leadership, to the TPLF as essentially the last line of defense for this entire population,” Hudson told DW.

The ethnic hostility raises the question of how Ethiopia can move towards peace and reconciliation.

In a recent article, social harmony scholar Mohammed Girma argues that Christians and Muslim religious groups in Ethiopia have “big roles to play” to prevent the tragedy unfolding the country.

“Ethiopia is a deeply religious nation,” Girma writes, adding that in the past, its two dominant religions have “provided a vision for peaceful cohabitation.”

“There is a is a great need for an inter-religious peace effort,” he writes and for religious leaders to “find courage to speak truth to power” and “focus their teachings on healing and reconciliation.”

Former diplomat Hudson believes Abiy has “too much blood on his hands” to continue to govern Ethiopia even if the prime minister manages to end the conflict.

“The country will need a fresh political start,” Hudson said.

A number of conflict experts, including Hudson, believe Ethiopia will need to initially establish a transitional multi-ethnic and ethnically balanced government.

In the longer term, its thought the country needs to set up a national dialogue to examine the different visions of Ethiopia and agree on the state’s fundamental orientation.

“The last year has created such new tension and such new rifts,” said Hudson.

Now there needs to be “some kind of broad-based grassroots conversation about how the country can be not just governed, but how it can be constructed in a way that allows for ethnicity to be identified without it being the defining feature of Ethiopian political life.”

Cathat
The skin flints using ethiopian airlines would do very well to take the contents of this article on board.