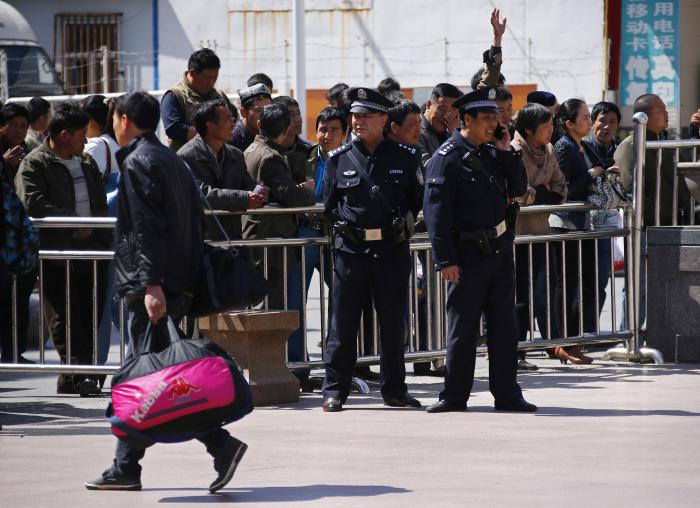 PHUKET: Two of the assailants who carried out a bombing in western China were among the three people killed, state media said on Thursday, in an attack which also wounded 79 and has raised concerns over its apparent sophistication and daring.

The People’s Daily, the official newspaper of the ruling Chinese Communist Party, said on its official microblog that “two mobsters set off bombs on their bodies and died”, though the report did not call it a suicide bombing.

The other person who died was a bystander, the People’s Daily said.

Knives and explosives were used in the assault on a railway station in Urumqi on Wednesday, the first bomb attack in the capital of Xinjiang region in 17 years. The attack was carried out soon after the arrival of a train from a mainly Han Chinese province, state media said.

The bombing was possibly timed to coincide with a visit to the heavily Muslim region by President Xi Jinping, when security was likely to have been heavy.

On Thursday, dozens of black police vans were parked around the station, while camouflaged police with assault rifles patrolled its entrance. Despite the security, the station was bustling and appeared to be operating normally.

The government blamed the attack on “terrorists”, a term it uses to describe Islamist militants and separatists in Xinjiang who have waged a sometimes violent campaign for an independent East Turkestan state – a campaign that has stirred fears that jihadist groups could become active in western China.

State media accounts did not say if any other attackers had been killed or captured. Nor did they say if Xi, who was wrapping up his visit, was anywhere near Urumqi at the time.

Pan Zhiping, a retired expert on Central Asia at Xinjiang’s Academy of Social Science, described the attack as very well organised, saying it was timed to coincide with Xi’s visit.

“It is very clear that they are challenging the Chinese government,” he said.

“There was a time last year when they were targeting the public security bureau, the police stations and the troops. Now it’s indiscriminate – terrorist activities are conducted in places where people gather the most.”

There has been no claim of responsibility for the attack.

But the language used by the government to describe the incident, with the reference to the assailants as “terrorists”, implies that it was carried out by Uighurs, the Muslim people who call Xinjiang home, many of whom chafe at government controls on their culture and religion.

Nicholas Bequelin, a senior researcher at New York-based Human Rights Watch who closely follows developments in Xinjiang, called the attack “an unprecedented act of defiance from Uighurs who oppose the Chinese state”.

“It’s hugely significant and it’s extremely politically embarrassing for Xi Jinping who has taken a very hard stance on the Xinjiang issue, and made a big show while visiting Xinjiang that Xinjiang is safe for the Han,” he said.

The attack was the first bombing in Urumqi since bombs on buses killed nine people in 1997. It was also the largest militant attack there since the government blamed Uighurs for stabbing hundreds of Han Chinese with needles in 2009.

No one was killed in that incident, but it led to protests demanding the removal of the region’s top official for failing to protect Han people, China’s majority ethnic group.

“Knife-wielding mobs” slashed at people at an exit of the South Railway Station of Urumqi on Wednesday night and set off explosives, Xinhua news agency said, quoting police. Security is normally very tight at the entrances of railway stations, but exits are often unguarded and crowded. The South Railway Station is where seasonal workers, mainly Han Chinese, arrive from other parts of China to pick cotton, Bequelin said.

Urumqi is now heavily populated by Han Chinese, who have flooded the capital and other parts of Xinjiang seeking business opportunities. Uighurs have complained that they have been frozen out of the job market.

“I just don’t believe it was a Uighur who did this,” said one 35-year-old Uighur man selling dried fruit about 100 metres from where the blast occurred.

“We don’t have a sense of security. These public spaces aren’t safe for anyone, Uighur or Han.”

The attack came on the eve of a two-day Labour Day holiday, a time of heavy travel in China, and just as Han passengers were likely to be disembarking from a train from Chengdu, capital of southwestern Sichuan province, Xinhua said.

“Everyone was running and hiding. I was terrified,” said Li Tianlin, a 53-year-old labourer. “We are still afraid and don’t dare go over to the train station.”

Exiles and many human rights groups say the cause of unrest in the resource-rich and strategically located region is heavy-handed rule by authorities, including curbs on Islam and the culture and language of its Uighur people.

Xinhua said in a commentary that “instigators might be away from the home field”, condemning the spokesman for the German-based World Uyghur Congress exile group for saying that “such incidents could happen again at any time”.

Spokesman Dilxat Raxit said in a email that more than 100 Uighurs had been detained since the attack, adding that Xi’s visit was being used an excuse by China to step up their “armed repression” in Xinjiang.

“Any provocation by China will directly inflame the situation and further worsen the unrest,” he said.

Luo Fuyong, a spokesman for the Xinjiang government, denied Raxit’s allegations. “This kind of disinformation and slander has no basis,” Luo told Reuters by telephone. “This is deliberate hostile rumour-mongering.”

Wednesday’s attack was the latest in a recent spate blamed by the government on Uighur militants.

In early March, 29 people were stabbed to death in the southwestern city of Kunming. Five months earlier, a car ploughed into tourists on the edge of Beijing’s Tiananmen Square, killing the car’s three occupants and two bystanders.

Unrest in Xinjiang has caused the deaths of more than 100 people in the past year.