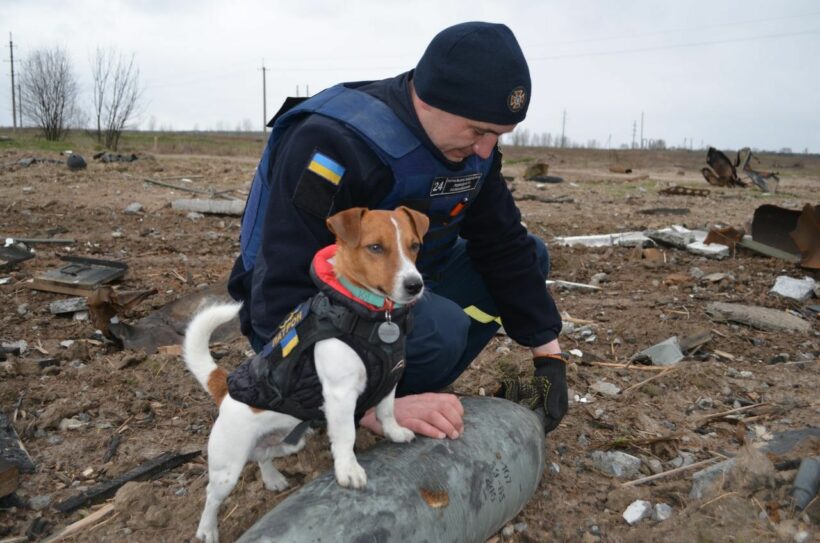 A small but mighty dog named Patron has been awarded the Medal for Dedicated Services for his military work in Ukraine’s fight against Russia. Ukrainian President Volodymyr Zelenskyy presented Patron the dog with the “medal of courage” on Sunday. Patron has sniffed out over 200 undetonated landmines planted by Russian soldiers in Ukraine so far.

Patron – which means “ammo” in Ukrainian – is a 2.5 year old Jack Russell Terrier who wears a tiny protective vest. He is a landmine finder and mascot of the Emergency Service of Ukraine. So far, Patron has uncovered 238 unexploded Russian explosive devices, primarily in the Ukrainian city of Chernihiv.

The four-legged hero wagged his tail ferociously in the presence of Ukrainian President Volodymyr Zelenskyy and Canadian Prime Minister Justin Trudeau as he was awarded the medal “For Dedicated Work in the Ukrainian Army” on Sunday.

Zelenskyy, apologising for not having any dog treats on hand, expressed his appreciation for Patron…

“I want to award those Ukrainian heroes who are already clearing our land of mines.”

“And together with our heroes – a wonderful little sapper Patron who helps not only to neutralise explosives but also to teach our children to necessary safety rules in areas where there is a mine threat.”

Patron has become a symbol of Ukrainian patriotism. Last week, Minister of Internal Affairs Denys Monastyrsky announced the launch of the International Coordination Centre for Humanitarian Demining, using Patron as a symbol for the centre.

Patron has gained 200,000 followers on his official Instagram page.

Patron received his recognition. Among those who save the lives of 🇺🇦 every day are four-legged heroes. The most famous among them is Patron, a bomb-sniffing dog. In the presence of @JustinTrudeau, @ZelenskyyUa presented him an award “For Dedicated Work in the #UAarmy“. pic.twitter.com/mssSTlfIKW