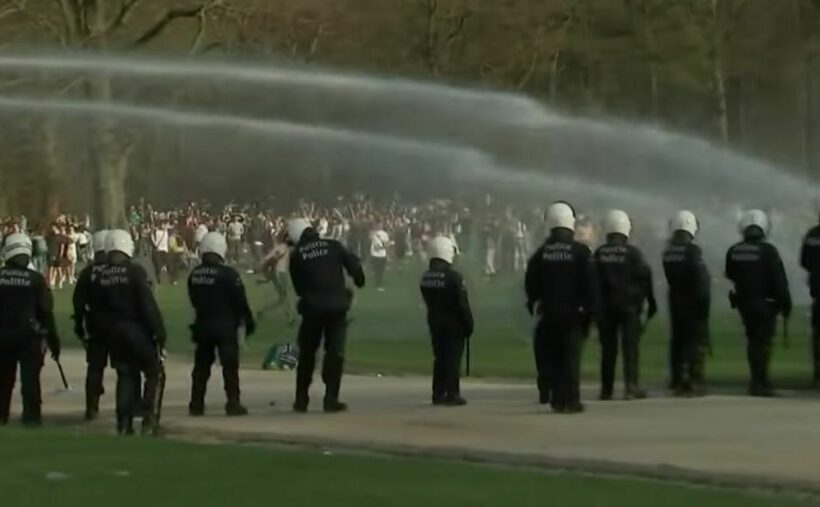 While the Thai government has decided that spraying water for Songkran may lead to a Covid-19 outbreak, Belgian authorities sprayed water on a crowd to prevent a Covid-19 outbreak in Brussels. What started as an April Fool’s Day prank devolved into pandemonium and violence as throngs of people violating coronavirus restrictions and police trying to enforce the rules. Mounted on horseback, police had to use water cannons on an unruly crowd of 2,000 people to restore order.

A fake concert was announced on social media as a prank for April Fool’s Day and Brussels law enforcement issued a warning that the party was illegal and the organisers could face legal problems. But 2,000 people itching to get out of the house and enjoy the spring weather showed up anyway. Police attempted to control the crowd and enforce the strict Covid-19 social-distancing policies, where gatherings of more than 4 people are prohibited. Belgian restrictions were increased Saturday to keep borders closed, close schools, and limiting non-essential shops.

Donning safety helmets and advancing in formation at the Bois de la Cabmre park in the south of Brussels, police were met with some violent protest. Journalists reported seeing projectiles thrown at police and 3 officers were wounded, one hospitalized, with 4 people arrested, according to police. A concert-goer said they were tear-gassed as well. Police eventually deployed water cannons to finally disperse the crowd.

Taiwan and Palau launch the first travel bubble in Asia