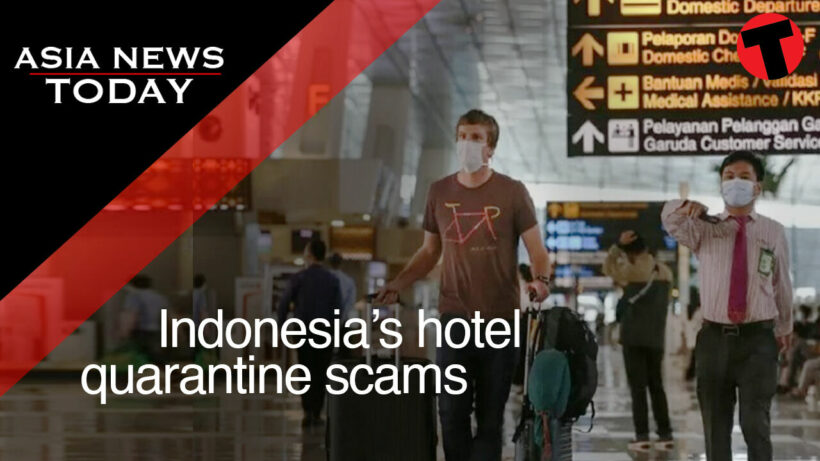 Indonesia’s Tourism Ministry say authorities are cracking down on hotel quarantine scams, who he claims are allegedly perpetrated by organised groups, against foreign travellers. He’s already coined the groups the “quarantine mafia”. Police have been following up allegations of numerous reported scams in hotel quarantine across Jakarta. The scam involves travellers being told at the end of their hotel quarantine period that their PCR test result is positive, so they are forced into a special ‘isolation hotel’ where they have to pay for further accommodation. The travellers, with no symptoms, are also not allowed to get a second test to confirm the earlier positive result.Indonesian authorities say they are now cracking down on the alleged scam by allowing travellers to get an independent second test. Indonesia’s tourism minister says that the Ministry of Tourism … are investigating and will give heavy punishment to those who break the government’s rules.

Meanwhile, Bali has welcomed its first international flight after nearly two years. The Singapore airlines flight carrying 109 International traveller and 47 Indonesians touched down in Bali. Foreign arrivals must stay at one of only 27 designated hotels within the quarantine bubble for three to seven days, depending on their number of vaccines doses, according to new nationwide entry regulations announced this week. The governor has said he hopes that by early March there will be no more quarantine obligation for tourists as long as they comply with health protocol requirements and show negative test results before their departure and arrival in Bali.

China has spoken out about Taiwan and Sinjiang at the Winter Olympics in Beijing for the first time. Jordon Shin reports….Speaking at the daily press conference, reports asked IOC spokesperson Mark Adams a question about Taiwan’s attendance at Sunday’s closing ceremony.
Following his reply, Yan Jourong, spokesperson of the Beijing Games, said: There is only one China. Her statement reiterates the CCP’s stance on the democratically ruled island, which China regards as a renegade province that must eventually to be united with the motherland. Yan also insisted on making a statement on Xinjiang, when the IOC was asked about the source of material being used in clothing.Yan said: The so-called forced labour in Xinjiang is lies made up by deliberate groups. The statements come as Western countries engage in a diplomatic boycott of the Winter Olympics in protest of China’s human rights record.Taiwan, which usually competes in sporting events as “Chinese Taipei,” took part in the games’ opening ceremony earlier this month, after saying it could not attend because of Covid-19 rules and delayed flights.

Hong Kong’s chief executive, Carrie Lam, is vowing to go all-out as the territory fights the current surge of Covid cases. The Hong Kong leader says the special administrative region government will shoulder its responsibility to rein in the current surge in cases which has overwhelmed hospitals and left patients on gurneys in the streets. The fifth wave, mostly Omicron infections, has developed far beyond the capacity of the SAR government to handle. Carry Lam says the rapid development of the disease has put Hong Kong under a considerably severe situation and outgrown the handling capacity of the government.

As Covid infections and restrictions fall in the US and Europe, parts of Asia and the Pacific remain in the thick of a surge driven by the omicron variant. Malaysia, Singapore and South Korea are currently reporting new daily records.Malaysia logged 27,831 new cases yesterday, the country’s highest tally of the pandemic. South Korea also reported over 93,000 new infections. Singapore, an island of only 5.7 million, recorded nearly 17,000 new infections.
Otherwise, both Indonesia and New Zealand marked new daily records yesterday, while Vietnam, Japan and Thailand all remain in the grasp of the highly infections but less severe omicron variant, with high case counts. Deaths, which typically go up days after a surge in new infections, have also started to climb across the region. At the same time, many of the Asian governments continue to move ahead with tentative to plans to either re-open their borders or reduce current restrictions and paperwork for travel to resume.

Meanwhile, Malaysian Pausi Jefridin, who was scheduled to be hanged in Singapore on Wednesday, has been granted a stay by the Singaporean president.
There’s also been a respite order issued for Singaporean Roslan Bakar, who is also on death row and was scheduled for hanging on the same day. Counsel for the two men filed an application to Singapore’s High Court seeking to declare that the death sentences were unconstitutional. This was heard and dismissed by the High Court on Wednesday morning but a temporary stay of execution was later granted pending appeal. But that appeal was later dismissed by the three judge panel. The respite by the Singaporean president has no sunset date and is currently ongoing.

Philippines boxing legend and presidential hopeful Manny Pacquiao said at a campaign rally that he would get hands-on when dealing with corrupt government officials. He said… I will personally haul them to jail.It’s his latest swing in the battle against government graft and corruption. If elected, he says he would enlist the the help of the Jesus Is Lord founder for his integrity and shared commitment to fighting corruption. Other campaign promises included ending the development of socialised housing sites in far-flung areas, which he says makes it difficult for families who have been relocate to make a decent living.

Durian growers in Thailand are preparing for stringent import checks with their biggest buyer — China, as the country continues to enforce its zero-Covid policy. Last year, Thailand exported more than 875 thousand tonnes of its pungent yellow fruit to China by land, sea and air, generating an estimated 3.4 billion USD. This year, Thai farmers hope to increase their exports as they expect larger harvests, but China’s strict Covid policies threatens to derail the season’s high expectations. Currently, land transport by truck is the most common method of export. But if Covid-19 is detected at the border, durian goods could be destroyed and the border closed for days or even weeks. This year the Thai government is looking to join its neighbour Laos in exporting produce via the new China-Laos high speed railway, which connects the Laos capital of Vientiane to the Chinese city of Kunming.According to the Thai Durian Association, one train could transport between 35 to 50 containers of the spikey fruit.Durian season beings in March.

riclag
Unbelievable! Who are these system developers! Seems they have failed to protect everything covid related! Morprom was the last, I think!