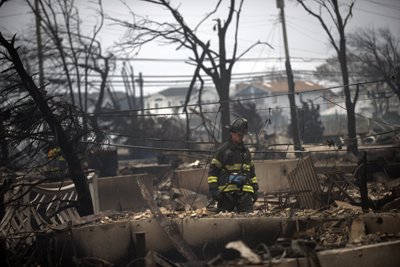 
Discovery of WWII bomb forces closure of Japanese airport
Phuket Gazette / News Wires
PHUKET: Nearly 100 flights were canceled yesterday after an unexploded bomb believed to be from World War II was found near the runway of a major airport in northeastern Japan, local authorities said. Flights are expected to resume on Wednesday morning.

The 250-kilogram (550-pound) bomb was discovered late Monday evening when construction workers were carrying out restoration work at a site close to a taxiway at Sendai Airport, which is located in Natori city of Miyagi prefecture. The airport was badly damaged by the earthquake and tsunami last year.

Although airport authorities believe the risk of a detonation is small due to an eroding blasting fuse, all 92 inbound and outbound flights scheduled for yesterday were canceled as a precaution. Flights are expected to resume this morning after the military bomb squad piled mounds around the bomb to prevent fragments from scattering in the event of an explosion.

The complete disposal of the bomb, which is about 110 centimeters (43 inches) long and has a diameter of approximately 35 centimeters (13.7 inches), is expected to take several days. Local authorities said the explosive was found buried about 50 centimeters (19.6 inches) under the ground, and army experts have determined it is a bomb dropped by the U.S. military during World War II.

The United States heavily bombed major Japanese cities during World War II, and it is not unusual for unexploded bombs to be found. Just last week, hundreds of people were evacuated in central Tokyo, the country’s capital, after the discovery of a 220-kilogram (485-pound) bomb.

The storm killed at least 45 people, including at least 18 in New York City, and insurance companies started to tally billions of dollars in losses.

The storm hit with just a week to go to the November 6 presidential election, disrupting campaigning and early voting and raising questions about whether polling stations in some hard-hit communities would be ready to open by next Tuesday.

Sandy, which crashed ashore with hurricane-force winds on Monday near the New Jersey gambling resort of Atlantic City, was the biggest storm to hit the country in generations.

Businesses and homes along New Jersey’s shore were wrecked and communities were submerged under floodwater across a large area. More than 8 million homes and businesses in several states were without electricity as trees toppled by Sandy’s fierce winds took down power lines.

Across the region, crews began the monumental task of restoring power for anxious customers and getting transportation up and running could take time after the storm caused nearly 16,000 flight cancellations.

Cellphone service outages were widespread in many states and even some emergency call centers were affected.

The storm reached as far inland as Ohio and parts of West Virginia were buried under 3 feet (1 meter) of snow, a boon for ski resorts that was one of the storm’s few bright spots.

Some cities like Washington, Philadelphia and Boston were spared the worst effects of the storm and were ready to return to normal by Wednesday. But New York City, large parts of New Jersey and some other areas will need at least several days to get back on their feet.

Seeking to show he was on top of the aftermath of the storm in the nation’s most densely populated region, the White House said President Barack Obama planned to tour damaged areas of New Jersey on Wednesday accompanied by Christie.

The New Jersey governor, who has been a strong supporter of Republican presidential challenger Mitt Romney, praised Obama and the federal response to the storm.

“New Jersey, New York in particular have been pounded by this storm. Connecticut has taken a big hit,” Obama said during a visit to Red Cross headquarters in Washington.

“To describe it as looking like pictures we’ve seen of the end of World War Two is not overstating it. The area was completely levelled. Chimneys and foundations were all that was left of many of these homes,” said New York Mayor Michael Bloomberg after touring the area.

Neighborhoods along the East and Hudson rivers bordering Manhattan were underwater and expected to be without power for days, as were low-lying streets in Battery Park near Ground Zero, where the World Trade Center once stood.

“I’m lucky to have gas; I can make hot water. But there is no heating and I’m all cold inside,” said Thea Lucas, 87, who lives alone in Manhattan’s Lower East Side.

Further north, though, many retail stores, restaurants and bars reopened in neighborhoods that did not lose power.

In Brooklyn’s Prospect Park, runners, dog-walkers and children were out and about among fallen trees.

Organizers of Sunday’s New York City Marathon were left scrambling. The world’s largest 26.2-mile footrace typically has over 47,000 entrants from around the world, deploys thousands of volunteers, and winds through all five boroughs.

One disaster modelling company said Sandy may have caused up to $15 billion (9 billion pounds) in insured losses. That would make it the third-costliest hurricane on record, behind hurricanes Katrina, which laid waste to New Orleans and the Gulf Coast in 2005, and Andrew, which devastated parts of Florida in 1992.

While damage was still being assessed, federal authorities made $13 million in “quick release” emergency relief funds available to New York and Rhode Island.

Obama faces political danger if the government fails to respond well, as was the case with predecessor George W. Bush’s botched handling of Katrina. Obama has a chance to show not only that his administration has learned the lessons of Katrina, but that he can take charge and lead during a crisis.

All along the East Coast, residents and business owners found scenes of destruction.

“There are boats in the street five blocks from the ocean,” said evacuee Peter Sandomeno, one of the owners of the Broadway Court Motel in Point Pleasant Beach, New Jersey. “That’s the worst storm I’ve ever seen, and I’ve been there for 11 years.”

Sandy, which was especially imposing because of its wide-ranging winds, brought a record s