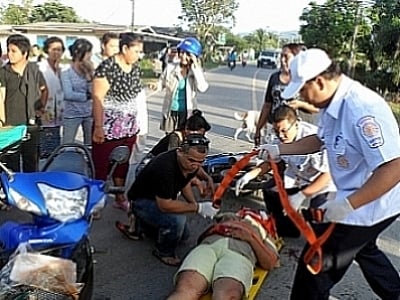 PHUKET: More than 15 people die every month in road accidents in Phuket, most riding a motorbike without a helmet.

“Thailand has among the highest number of road accidents in the world… and Phuket is in the top five for such accidents in Thailand,” Gen Choti told his audience of community leaders, lecturers and students.

“About 33 to 35 people are injured each day and more than 15 people die each month in road accidents in Phuket. The motorbike riders in those accidents are not wearing helmets,” he stressed.

Gen Choti explained that Phuket’s nationally recognized “100% helmet use” campaign has done much to reduce the death-and-injury road toll on the island, but quickly added that more needed to be done.

“Although about 80 per cent of all motorcycle riders in Phuket now tend to be more concerned about their safety and wear helmets while they are riding, many of them still do not follow the traffic laws. Drivers and riders should be more careful and considerate toward other road users too,” he said.

Road safety was not just a local issue, but global, Gen Choti explained.

“The helmet-wearing campaign supports the ‘Decade of Action for Road Safety from 2011 to 2020’ in line with the Moscow Declaration issued on November 20, 2009 by ministers and senior officials from 150 countries.

“That’s why the government is conducting its campaign to promote the use of helmets by youngsters and adults. It is to educate Thai people about the benefits and the importance of wearing a helmet while riding,” he said.