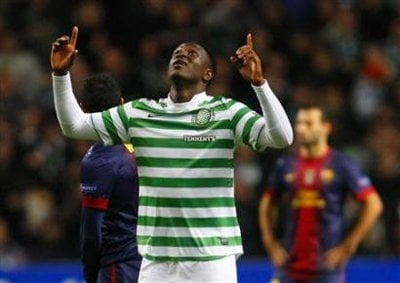 PHUKET: Barcelona wasted their first chance to reach the Champions League last 16 after a surprise defeat by Celtic but Manchester United edged through and six-goal Bayern Munich rocketed closer to progression last night.

Favorites Barca lost 2-1 in Glasgow after Victor Wanyama and Tony Watt struck in a famous win for the modest Scottish champions, who exposed the continued defensive frailties of the slick passing Catalans with non-stop energy and physicality.

Lionel Messi pulled one back late on but the point that would have put the Group G leaders through was not forthcoming even if they still lead Celtic by two points and Benfica, 2-0 winners over Spartak Moscow, by five with two to play.

“It’s right up there, one of the proudest moments of my career. This is monumental,” Celtic manager Neil Lennon told reporters. His side had also led at the Nou Camp before a late 2-1 loss last month.

“We wanted to do ourselves justice and we surpassed that. We’ve beaten the best club in the world. It was a stiff examination and we came through it with flying colors.”

A power cut after Alan’s opening penalty for the Portuguese hosts had held up the Group H game for around 10 minutes in the second half but United roared back.

Shakhtar Donetsk could have gone through with a win in Group E but lost 3-2 at stuttering holders Chelsea, who netted in injury time through Victor Moses’s header from a corner to spark wild scenes at Stamford Bridge.

“We deserved to win the game today, particularly in the second half where we dominated. I only played 10 minutes but it was good to get the winning goal,” forward Moses said.

Brazilian Willian, who reports have linked with the Londoners after he helped the Ukrainians win 23 out of their last 23 domestic league games, had equalized twice with neat finishes after well-worked moves from the 2009 UEFA Cup winners.

They had shot themselves in the foot early on when goalkeeper Andriy Pyatov’s clearance cannoned into the goal off Fernando Torres and the keeper’s clearing header was wonderfully sent into the net from distance by Oscar to make it 2-1.

Juventus powered to 4-0 home victory over Denmark’s Nordsjaelland, avenging the 1-1 draw at the minnows two weeks’ ago, but the Turin side stay third on six points with the Ukraine and English sides on seven.

Bundesliga leaders Bayern, beaten by Chelsea in last season’s final, were 5-0 up at halftime against the hapless Ligue 1 outfit after Bastian Schweinsteiger and Arjen Robben had also hit the net.

Toni Kroos made it six in the second period after Salomon Kalou’s meaningless effort for Lille.

Despite the heroics from Pizarro, only playing after Bayern’s top scorer Mario Mandzukic was ruled out with a cold, the Champions League night belonged to plucky Celtic after another exciting burst of top-class matches.

Celtic have long been pilloried for the weakness of the Scottish league they dominate, made worse this season by the demotion of long-time rivals Rangers due to financial problems.

The lack of competitiveness domestically had hit Celtic’s recent European campaigns but the 1967 winners are in with a shout of a rare last 16 spot despite having only 16.4 percent possession against a Barca side who lost in the group stage for the first time since 2009.

Barca, going for a fifth title, have recently had to field questions about their lack of options at the back and lack of willingness to buy center halves and looked shaky despite the return of Gerard Pique off the bench.

Wanyama headed in at the far post from a corner on 21 minutes amid slack marking and 18-year-old substitute Watt could not believe his luck seven minutes from time when Xavi missed a long punt up field and the youngster finished off with aplomb.

Messi, who had earlier rattled the woodwork, then made for a nervous finish in stoppage time but Celtic Park soon erupted with joy as the whistle blew to crown a remarkable triumph.