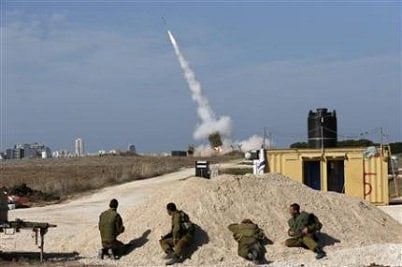 
More diplomacy to try to halt Israel-Gaza fighting
Reuters / Phuket Gazette
PHUKET: Hostilities between Islamist militants and Israel entered a sixth day as diplomatic efforts were set to intensify to try to stop rocket fire from the Gaza Strip and Israeli air strikes on Gaza.

International pressure for a ceasefire seemed certain to mount after the deadliest single incident in the flare-up on Sunday claimed the lives of at least 11 Palestinian civilians, including four children.

United Nations Secretary General Ban Ki-moon was due to arrive in Cairo to add his weight to the truce efforts today. Egypt has taken the lead in trying to broker a ceasefire and its officials met the parties yesterday.

Israeli media said a delegation from Israel had been to Cairo for talks on ending the fighting, although a government spokesman declined to comment on the matter.

Egyptian President Mohamed Mursi met Khaled Meshaal, the political leader of Hamas, which runs the Gaza Strip, and Ramadan Shallah of Islamic Jihad as part of the mediation efforts, but a statement did not say if talks were conclusive.

Izzat Risheq, a close aide to Meshaal, wrote in a Facebook message that Hamas would agree to a ceasefire only after Israel “stops its aggression, ends its policy of targeted assassinations and lifts the blockade of Gaza”.

Listing Israel’s terms, Vice Prime Minister Moshe Yaalon wrote on Twitter: “If there is quiet in the south and no rockets and missiles are fired at Israel’s citizens, nor terrorist attacks engineered from the Gaza Strip, we will not attack.”

Israel withdrew settlers from Gaza in 2005 and two years later Hamas took control of the impoverished enclave, which the Israelis have kept under blockade.

The 11 Palestinian civilians were apparently killed during an Israeli attack on a militant, which brought a three-storey house crashing down on them.

Gaza health officials have said 75 Palestinians, 21 of them children and several women, have been killed in Gaza since Israel’s offensive began. Hundreds have been wounded.

Grave concerns
Ban expressed grave concern in a statement before setting off for the region. He will visit Israel tomorrow.

“I am deeply saddened by the reported deaths of more than ten members of the Dalu family… (and) by the continuing firing of rockets against Israeli towns, which have killed several Israeli civilians. I strongly urge the parties to cooperate with all efforts led by Egypt to reach an immediate ceasefire,” he said.

Israeli Prime Minister Benjamin Netanyahu said he had assured world leaders that Israel was doing its utmost to avoid causing civilian casualties in the military showdown with Hamas.

In scenes recalling Israel’s 2008-2009 winter invasion of Gaza, tanks, artillery and infantry have massed in field encampments along the sandy, fenced-off border with Gaza and military convoys moved on roads in the area.

Israel has authorised the call-up of 75,000 reservists, although there was no immediate sign when or whether they might be needed in a ground invasion.

Israel’s operation has so far drawn Western support for what U.S. and European leaders have called its right to self-defence, but there have also been a growing number of appeals to seek an end to the hostilities.

Netanyahu said Israel was ready to widen its offensive.

“We are exacting a heavy price from Hamas and the terrorist organisations and the Israel Defence Forces are prepared for a significant expansion of the operation,” he said at a cabinet meeting on Sunday, but gave no further details.

The Israeli military said 544 rockets fired from Gaza have hit Israel since Wednesday, killing three civilians and wounding dozens. Some 302 rockets were intercepted by Iron Dome and 99 failed to reach Israel and landed inside the Gaza Strip.

Israel’s declared goal is to deplete Gaza arsenals and force Hamas to stop rocket fire that has bedevilled Israeli border towns for years. The rockets now have greater range, putting Tel Aviv and Jerusalem within their reach.

The southern resort city of Eilat was apparently added to the list of targets when residents said they heard an explosion thought to be a rocket, but it caused no damage or casualties, police said.

Eilat is thought to be well out of the range of any rocket in possession of Hamas or any other Gaza group. But Palestinian militants have in the recent past fired rockets at Eilat and its surroundings, using Egypt’s Sinai desert as a launch site.

Sworn enemies
Hamas and other groups in Gaza are sworn enemies of the Jewish state which they refuse to recognise and seek to eradicate, claiming all Israeli territory as rightfully theirs.

Hamas won legislative elections in the Palestinian Territories in 2006 but a year later, after the collapse of a unity government under President Mahmoud Abbas the Islamist group seized control of Gaza in a brief and bloody civil war with forces loyal to Abbas.

Abbas then dismissed the Hamas government led by the group’s leader Ismail Haniyeh but he refuses to recognise Abbas’ authority and runs Gazan affairs.

While it is denounced as a terrorist organisation in the West, Hamas enjoys widespread support in the Arab world, where Islamist parties are on the rise.

Western-backed Abbas and Fatah hold sway in the Israeli-occupied West Bank from their seat of government in the town of Ramallah. The Palestinians seek to establish an independent state in the West Bank and the Gaza Strip with East Jerusalem as its capital.