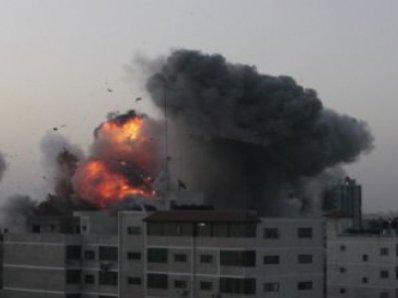 
Israel, Gaza fighting rages on as Egypt seeks peace
Phuket Gazette / Reuters
PHUKET: Israel bombed militant targets in Gaza for a fifth straight day this morning (Phuket time), launching aerial and naval attacks as its military prepared for a possible ground invasion, though Egypt saw “some indications” of a truce ahead.

Forty-seven Palestinians, about half of them civilians, including 12 children, were killed in Israel’s raids, Palestinian officials said. And more than 500 rockets were fired from Gaza struck Israel, killing three people and injuring dozens.

Israel unleashed its massive air campaign on Wednesday, killing a leading militant of the Hamas Islamist group that controls Gaza and rejects Israel’s existence, with the declared goal of deterring gunmen in the coastal enclave from launching rockets that have plagued its southern communities for years.

The Jewish state has since launched more than 950 air strikes on the coastal Palestinian territory, targeting weaponry and flattening militant homes and headquarters.

The raids continued past midnight yesterday, with warships bombarding targets from the sea. And an air raid targeted a building in Gaza City housing the offices of local Arab media, wounding three journalists from al Quds television, a station Israel sees as pro-Hamas, witnesses said.

Two other predawn attacks on houses in the Jebalya refugee camp killed one child and wounded 12 other people, medical officials said.

“This round of confrontation will not be the last against the Zionist enemy and it is only the beginning.”

The masked gunman dressed in military fatigues insisted that despite Israel’s blows Hamas “is still strong enough to destroy the enemy.”

An Israeli attack yesterday destroyed the house of a Hamas commander near the Egyptian border.

Casualties there were averted, however, because Israel had fired non-exploding missiles at the building beforehand from a drone, which the militant’s family understood as a warning to flee, and thus their lives were spared, witnesses said.

Israeli aircraft yesterday also bombed Hamas government buildings in Gaza, including the offices of Prime Minister Ismail Haniyeh and a police headquarters.
Among those killed in yesterday’s strikes on Gaza were at least four suspected militants riding motorcycles, and several civilians including a 30-year-old woman.

Israel’s operation has drawn Western support for what U.S. and European leaders have called Israel’s right to self-defense, but there have also been a growing number of calls from world leaders to seek an end to the violence.

British Prime Minister David Cameron “expressed concern over the risk of the conflict escalating further and the danger of further civilian casualties on both sides,” in a conversation with Israeli Prime Minister Benjamin Netanyahu, a spokesperson for Cameron said.

The United Kingdom was “putting pressure on both sides to de-escalate,” the spokesman said, adding that Cameron had urged Netanyahu “to do everything possible to bring the conflict to an end.”

Ben Rhodes, a deputy national security adviser to President Barack Obama, said the United States would like to see the conflict resolved through “de-escalation” and diplomacy, but also believes Israel has a right to self-defense.

Egyptian President Mohamed Mursi said in Cairo as his security deputies sought to broker a truce with Hamas leaders, that “there are some indications that there is a possibility of a ceasefire soon, but we do not yet have firm guarantees.”

Egypt has mediated previous ceasefire deals between Israel and Hamas, the latest of which unraveled with the recent violence.

A Palestinian official told Reuters the truce discussions would continue in Cairo on Sunday, saying “there is hope,” but it was too early to say whether the efforts would succeed.