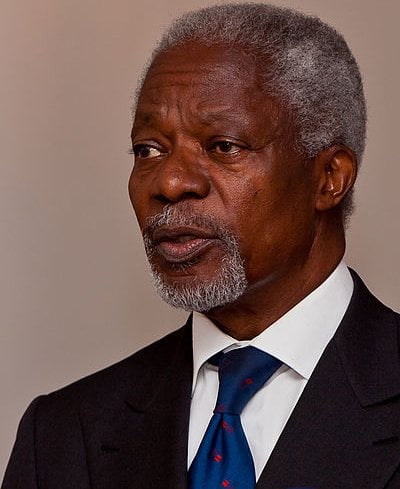 PHUKET: Kofi Annan informed the United Nations (UN) and the Arab League on Thursday that he will resign as their special envoy for the Syrian crisis at the end of this month, saying he is powerless to compel the Syrian government and the opposition to begin a political process.

Annan, who previously served as the UN’s Secretary-General, was appointed in late February to serve as the high-level representative of the UN and the League of Arab States, with the aim of bringing an end to violence and human rights violations in Syria and promoting a peaceful solution.

UN Secretary-General Ban Ki-moon said Annan informed him and Arab League Secretary-General Nabil El Araby of his intention not to renew his mandate when it expires on August 31. “I wish to express my deepest gratitude to Mr. Annan for the determined and courageous efforts he has made as the Joint Special Envoy for Syria,” Ban said.

“Yet the bloodshed continues, most of all because of the Syrian government’s intransigence, and continuing refusal to implement the six-point plan, and also because of the escalating military campaign of the opposition – all of which is compounded by the disunity of the international community,” he said.

The six-point plan for Syria as proposed by Annan calls for an end to violence, access for humanitarian agencies to provide relief to those in need, the release of detainees, the start of inclusive political dialogue, and unrestricted access to the country for the international media. Despite initial signs of acceptance of the plan by both the Syrian government and the opposition, it was not implemented, with each side blaming the other.

During his remarks, Annan blamed the UN Security Council for continued finger-pointing and name-calling at a time when the Syrian people need action. “Without serious, purposeful and united international pressure, including from the powers of the region, it is impossible for me, or anyone, to compel the Syrian government in the first place, and also the opposition, to take the steps necessary to begin a political process,” he said.

“I think that Kofi Annan’s resignation highlights two things – one, the fact that (Syrian) President Assad, despite his promise to abide by Kofi Annan’s plan, continues to brutally murder his own people, to use heavy weapons in assaults on civilian population centers, to call on his military leaders to kill the Syrian people in his name,” Carney said aboard Air Force One. “It is disgusting and only highlights the absolute requirement that, for the future of the Syrian people, Assad must step aside.”

He added: “Secondly, Annan’s resignation highlights the failure at the UN Security Council of Russia and China to support resolutions – meaningful resolutions against Assad that would have held Assad accountable for his failure to abide by his commitments under the Annan plan. Those vetoes, as we’ve said repeatedly, were highly regrettable, and place both Russia and China on the wrong side of history and on the wrong side of the Syrian people. Very unfortunate.”

In Damascus, the Syrian Foreign Ministry also expressed its regret over Annan’s resignation but accused other countries of not wanting Syria to overcome the ongoing crisis. “Syria has always declared and proved its full commitment to implementing the plan of Annan with its 6-points, and cooperated with the observers’ team in achieving the hoped-for mission,” a ministry statement said.

The ministry’s statement also said the Syrian government is still committed to “combating terrorism in light of the Syrian laws and the relevant UN Security Council decisions in order to restore security and stability to the country and protect the Syrian innocent citizens.” The Syrian government usually refers to opposition members as rebels or terrorists.

The UN estimates that more than 10,000 people, mostly civilians, have been killed in Syria and tens of thousands displaced since the uprising against President al-Assad began nearly 18 months ago. The opposition believes the number of deaths has already surpassed 20,000.