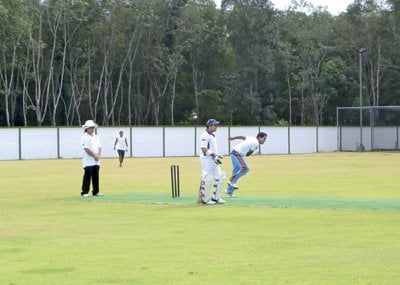 ICC won the toss and decided to send Patong into bat in a move that seemed to be working early on, as ICC dismissed opener Richard (Foldsy) Folds for a duck. Richard Desmond (27) and Rishi Sadarangani (30) took control of the game after a nervy start, with Sadarangani hitting the ball out the ground and into the nearby rubber plantation for six.

Sadarangani’s brothers Manesh (13) and Kishor (14) had a respectable day. Even Patong’s tail wagged with Anil Rawat chalking up 23 runs. The ICC didn’t do themselves any favors giving their opponents an extra 37 runs through wide deliveries and help Patong finish on 160-9 after their 20 overs innings.

ICC knew they had it all to do but they didn’t get off to the greatest of starts, suffering an early set back when Darshan Vaigankar was clean bowled in the second over. Patong nabbed another scalp the very next over with Seemant Raju knocking over the stumps of Naeem Ul Haq.

Imtiyaz Mushtaq (17) and Virender Kumar (23) put on a 40 run partnership but this ended with the first of Richard Desmond’s catches in what would be a fielding masterclass after Kumar skied a high ball out to mid-wicket.

Anand Chand provided a captain’s innings for ICC scoring 35, however he did not receive any support from his fellow team-mates with no other batsmen reaching double figures.The ICC’s innings finally came to an end with the score on 101 in the 16 over, with Richard Desmond diving full-stretch at mid-wicket.

This weekend at the ACG will sees current T20 champions, Laguna, take on The Village who will be looking to avenge their defeat in the Island Furniture League final and get amongst the points. The games start at 9am, Sunday August 5.