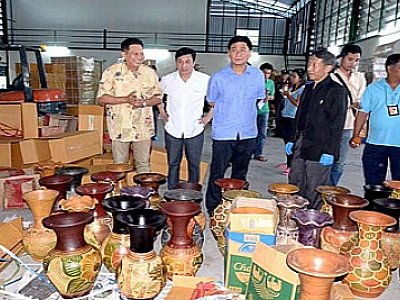 PHUKET: A Thai warehouse for terracotta pots was searched by police who believe that it served as a transit point for illicit drugs to be smuggled into Australia.

National Police chief Priewpan Dhamapong said late Thursday that the Thai police had been contacted by Australian authorities on Monday about drugs hidden in a shipment of two containers of Thai ceramics arriving at Sydney’s Port Botany.

Seven suspects were arrested in the raid – four from Hong Kong, and three Australian Chinese.

About 306kg of crystal methamphetamine (ya ice), 252kg of heroin and an unstated amount of marijuana were confiscated. The drug seizure was Australia’s biggest seizure of ice and its third largest haul of heroin.

The suspects implicated a Thai terracotta pot warehouse, where the drugs were packaged, in Pathum Thani’s Lam Luk Ka district.

Two employees were apprehended, while two other men – Ekkachai Wongsasee and Kasemsak Srimukda – were named in the business registration as persons responsible for the warehouse. Both men are still at large.

Various forms of terracotta pots, many carton boxes, and two grinding machines were found. Forensic police believed the machines were for grinding and pressing cannabis sticks, as there were some remnants of dried marijuana on the floor.

The employees said they had worked there for only a month and were unaware that the warehouse may have been used for packaging illegal drugs.

According to police investigators, empty terracotta pots were sent three times to Australia in order to test whether they could mislead authorities. The attempted smuggling took place in the fourth shipment when arrests were made.

Authorities are continuing the investigation in the belief that a larger drug smuggling ring is involved.

Meanwhile, according to police, a medium-sized cannabis grinding machine was found at another Lam Luk Ka warehouse, which police said was also used for packaging drugs.

PHUKET: Academics and religious leaders are opposed to the possible imposition of a curfew in the deep South in the wake of recent bomb attacks, saying that such drastic action would draw international sanctions on the counter-insurgency operations while also affecting the daily lives of local residents.

Meanwhile, security authorities are looking for eight vehicles reported stolen, which they fear could be used in future car-bomb attacks, especially in Songkhla and Pattani.

Curfews will lead to a drop in local residents’ morale and their confidence in the authorities’ abilities, Assoc Prof Srisomphob Jitphiromsri, a lecturer on political science at Prince of Songkhla University, said.

He said whilst curfews may improve the situation, there was a possibility that they could convince the international community violence would also be used by authorities in counter-insurgency operations.

A former director of the Southern Border Provinces Administrative Centre (SBPAC), Niphon Bunyaphattharo, said curfews would inflame the situation, and arouse international concerns about authorities’ reactions to an increase in insurgency violence. He also dismissed a so called eye-for-an-eye response from authorities, which he said would lead to the escalation of the insurgency campaign into a religious war.

The chief religious leader in Yala, Wan Abdulkordeh Waemustopha, said a curfew during the ongoing Ramadan period would certainly affect Muslims, their religious practices and their daytime fast. The Defense Ministry and security authorities are evaluating the imposition of curfews, which they said would come into effect, if imposed, after Ramadan ends on August 21.

The imposition of a curfew, along with new military tactics including aerial armed reconnaissance, was among strategies revealed by Defense Minister Sukampol Suwannathat in response to a series of ca-rbomb attacks, followed by media criticism of the government’s inert reaction to the attacks. A proposal by the Internal Security Operations Command that it should be put in effect, if imposed, after Ramadan, has been submitted to the Defense Ministry for consideration.

Fourth Army Area commander Lt General Udomchai Thammasarorat said a curfew was merely an option and that local residents had cooperated with security officials in the deep South. He did not say explicitly whether he personally agreed with it being imposed. In four Yawi-speaking districts of Songkhla, local residents have been alert and ready for self protection, while all-out security measures are already in place,” he added.

The Army said later that curfews were now only an option and would not be imposed entirely in the three provinces of Yala, Narathiwat or Pattani, but only in areas prone to insurgent activities or necessary security operations, said spokesman Colonel Sansern Kaewkamnerd.

Pattani police said one of the three detained suspects allegedly involved with the shooting dead of four soldiers in MaYor district was cooperating and giving useful information. The unnamed man said newly recruited insurgents were from three Yawi-speaking districts in Songkhla, Raman district in Yala and Ba Cho district in Narathiwat, under the command of the foreign trained Runda Kumpalan Kecil (RKK) based in Pattani.

The bomb attack on CS Pattani Hotel in Pattani was blamed on six insurgents, including a getaway driver and two lookouts. This attack was possibly commanded by Mosoreh Tueramah, a native of Pattani living in Muang district, and an explosives expert, security sources said.

A village head based in Panareh district of Pattani was yesterday shot dead while on his way for a Muslim prayer event. Witnesses told police that two gunmen on a white Honda Wave motorcycle approached Mayusoh Dorloh and fired two shots at him before fleeing. The victim died at the scene.

PHUKET: Despite awareness campaigns and legal action against alcohol sales during the beginning of Buddhist Lent, stores were illegally selling liquor. There was even a new type of alcoholic drink launched on Asarnha Bucha Day, the Office of Alcohol Control said yesterday.