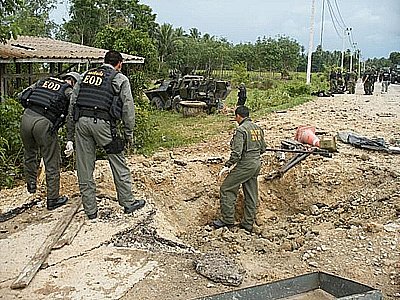 PHUKET: Just days before the eighth anniversary of Narathiwat’s Tak Bai massacre, the province erupted in violence over the weekend, with attacks continuing yesterday after five simultaneous incidents in the Tak Bai district on Saturday. The violence claimed the lives of an insurgent and a soldier.

An attack yesterday in Bacho district claimed the life of Petty Officer First Class Issarawut Palasak, who was driving an armoured personnel vehicle to help four comrades injured in an earlier attack.

Issarawut and three other troopers were on their way to the scene of an attack in tambon Bareh Tai in Tak Bai district when their vehicle was struck by remotely detonated explosives buried in the road. The impact forced the vehicle off the road, killing Issarawut instantly. The three other soldiers in the vehicle were seriously wounded.

Thursday marks the eighth anniversary of the Tak Bai massacre when, under the Thaksin government, hundreds of people arrested during a protest against the detention of six local men were handcuffed and thrown into trucks bound for an Army camp in nearby Pattani province. When the trucks arrived at the camp, 85 of the detainees were found to have died of suffocation during the journey.

On Saturday, Tak Bai district was rocked with five simultaneous attacks in which an insurgent was killed and five people were wounded, including a police officer and a 9-year-old girl.

In one of the attacks, the Tak Bai police station came under fire, leaving Pol Senior Sgt-Major Thoranin Ponpasuk, a Marine Police officer, with injuries to his left leg. The station and boats moored at its pier were riddled with bullets.

The insurgents also triggered explosives at a convenience store, a karaoke parlour and a hotel restaurant.

As of yesterday, police had not been able to identify a man believed to be an insurgent killed during the attack on the police station. Police said the man was a resident of Sungai Kolok district in Narathiwat.

Meanwhile, police impounded an Isuzu pickup truck left on the Sungai Kolok-Tak Bai Road after being alerted by local villagers. On the back seat of the vehicle, police found home-made explosives in a 50kg gas cylinder. A bomb squad spent about half an hour defusing the device.

An initial police investigation found that the vehicle was stolen from Rusoh district on October 8. Police said they would run a check on fingerprints found in the vehicle to identify those involved.

Yesterday, Deputy Prime Minister General Yutthasak Sasiprapha said during a visit to Surat Thani province that he would this week visit the deep South to give moral support to authorities and villagers.