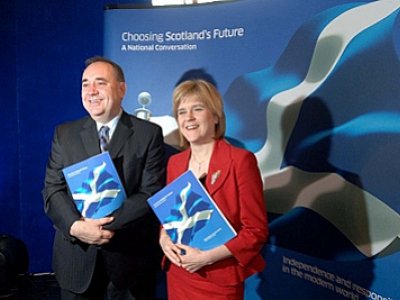 PHUKET: British Prime Minister David Cameron and Scottish First Minister Alex Salmond yesterday signed a historic agreement which will allow the Scottish government to hold a referendum to decide whether Scotland should break away from the United Kingdom.

Cameron and Salmond met at St. Andrews House in Edinburgh, the capital of Scotland, where the two leaders signed the so-called “Edinburgh Agreement” which grants the Scottish government special powers necessary for the independence referendum. It follows months of negotiations on the specific details of the agreement.

“What’s really important about this is, it sets out now, for the first time, an agreed process by which Scotland can become an independent country,” said Salmond, whose Scottish National Party (SNP) gained a majority with 69 of the 129 seats at Holyrood during the May 2011 elections and a mandate to govern until the next election in 2016.

The agreement grants the Scottish government the power to legislate a single-question referendum on Scottish independence before the end of 2014. The referendum is expected to take place in the autumn of 2014, but referendum legislation to be introduced by the Scottish parliament in the coming months will determine the exact date.

“The governments are agreed that the referendum should meet the highest standards of fairness, transparency and propriety, informed by consultation and independent expert advice,” the agreement signed by Cameron and Salmond said, adding that referendum legislation by the Scottish parliament will also set out the exact working of the question, rules on campaign financing and other rules of conduct.

All those entitled to vote in Scottish Parliamentary and local government elections will be able to participate in the referendum, but the referendum legislation is also expected to allow 16 and 17-year-olds to vote for the first time. “It will be for the Scottish Government to decide whether to propose extending the franchise for this referendum and how that should be done,” the agreement said on the matter.

“This marks the beginning of an important chapter in Scotland’s story and allows the real debate to begin,” said Cameron, who has vowed to keep the United Kingdom united. “It paves the way so that the biggest question of all can be settled: a separate Scotland or a United Kingdom? I will be making a very positive argument for our United Kingdom.”

Speaking in Edinburgh after Monday’s signing at St. Andrews House, he added: “It is now up to the people of Scotland to make that historic decision. The very future of Scotland depends on their verdict. It is that important. This agreement delivers the people’s referendum.”

But there are signs that support among Scots for independence is slipping. A survey released by pollsters TNS-BMRB last week indicates that only 28 percent of Scots are currently in favor of Scotland becoming an independent state, while 53 percent of those asked said they are not in favor of independence. About 19 percent said they were not sure.

Of the 1,063 registered voters and 923 likely voters interviewed for the ABC News/Washington Post poll, 93 percent said they are closely following the 2012 presidential race. The poll was was conducted by telephone between October 10 and 13, and the error margin is 3.5 points.

The race for the White House has been virtually tied for months, but Obama is under a massive amount of pressure from Democrats to step up his game after a lackluster performance during the first debate on October 3. Obama has been preparing at the Kingsmill Resort in Williamsburg, Virginia, since Saturday with the help of his top advisers.

Campaign spokeswoman Jen Psaki told reporters, during a briefing, that Obama is looking forward to answering questions from the American public during the second debate. “You should expect that he’s going to be firm but respectful in correcting the record and the times we expect Mitt Romney will hide from and distort his own policies. He’s energized and I expect he will also be making a passionate case,” she said.

Meanwhile, Romney has been practicing at his home in Belmont, Massachusetts. According to a report from POLITICO, the candidate and his advisers are struggling with how to replicate his successful performance during the first debate – focusing on stagecraft and body language.

Ohio Republican Senator Rob Portman, who is helping prep Romney for the second debate, told ABC’s This Week Sunday “they’ve (the Obama campaign) spent hundreds of millions of dollars around the country, including a lot in Ohio, mis-characterizing Governor Romney’s positions and misrepresenting him. And I think you’ll see that again at the debate.”

PHUKET: At least 24 people were murdered on Sunday when a group of gunmen stormed a village in central Nigeria, officials said on Monday.

The incident occurred early on Sunday morning at around 5:30am local time in the village of Dongo Dawa in the Gwari Local Government Area, which is in the state of Kaduna, when the gunmen, reportedly disguised in police uniforms, stormed the village.

Kaduna Police chief Olufemi Adenaike confirmed the death toll which stood at 24, while a local resident said the gunmen attacked a mosque just before sunrise, according to the Nation newspaper.

As the Police Mobile Force was deployed to the area, sealing off all the exits in order to search for the attackers, the local vigilance group in the area said four suspected gunmen were detained in the village of Kuyello.

The motive of the attack remains uncertain, but one army officer said it was a case of robbery. However, media reports also said the case could have been an act of revenge after locals had recently expelled a group of gunmen that had been operating in the village.

With a high number of robberies and sexual assaults against women, locals set up a vigilante group in the area, identifying assailants and expelling them one by one. A local leader said the attackers apparently regrouped and stormed the village, including the man suspected of identifying them. He was killed along with two of his children while his wife’s hands were cut off.