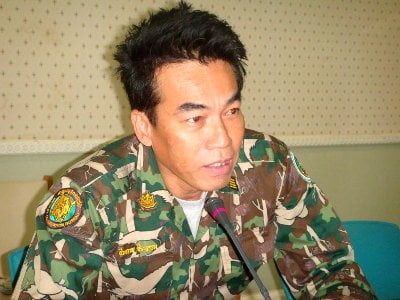 PHUKET: The 366 officials named to carry out the huge investigation into every plot of privately owned land along the border of Phuket’s Sirinath Marine National Park will draw lots to determine who will investigate which plots.

“The officers have been divided into 36 teams, with each team comprising six officers,” Sirinath Park Chief Cheewapap Cheewatham explained to the Phuket Gazette.

“Now the teams have to draw lots to see which plots of land they are going to be responsible for [investigating],” he added.

The officers will probe 379 plots suspected of encroaching on more than 3,000 rai of land in the park.

However, the officers must first undergo training. “The training focuses on conducting searches and land title validation techniques. The 366 officers are expected to begin their investigation by the end of this month,” Mr Cheewapap said.

“Rerngchai Prayoonwet, who is currently Acting Director-General of the Department of National Parks, Wildlife and Plant Conservation [DNP] reiterated that every officer [involved in the mass probe] must move very quickly with their work and continue the investigation of the plots of land as ordered by former DNP Director-General Damrong Phidet before his retirement on September 30,” he added.

Regarding the investigation into two Malaiwana plots, the Istana project site and the home of French businessman Bernard Gautier, all suspected of encroaching on the national park, Mr Cheewapap said,

“I have been informed by the experts at the DNP that after reviewing aerial photographs of the plots in question, all four are suspected of encroaching on park land.”

The news follows Narit Khamnurak, Chairman of the House of Representatives Standing Committee on Land, Natural Resources and Environment (CNRE), during an inspection visit to Phuket on September 28, ordering Mr Cheewapap to close the investigation into the four plots as “quickly as possible”.

“We are now waiting for the specialists who reviewed the aerial photographs to sign off, confirming that they have identified that the plots are encroaching on national park land,” Mr Cheewapap said.