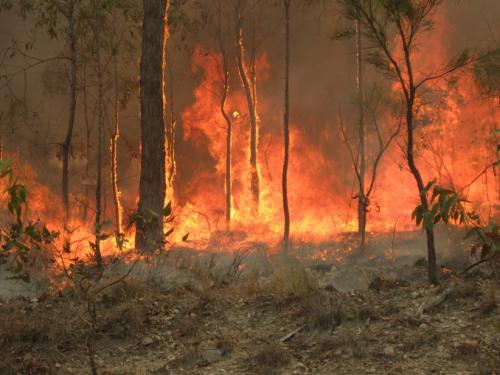 Parts of Tasmania’s east coast have been cut off by bushfires as a blaze on the Tasman Peninsula continues to burn out of control.

More than a dozen properties have been lost south of Bicheno, and Coles Bay Road, south of Apsley River, and the Tasman Highway, south of Tower Hill, are at risk.

“We are working with the state government to support people and make sure that they get through,” Ms Gillard said.

“My message is there’s only one you. Everything else in life at the end of the day, no matter how precious, can be replaced.

“What can’t be replaced is a human life,” she added.

Insurers declared the bushfire-hit towns a “catastrophe” and police powers were increased when the Tasman Peninsula was declared a serious-incident site.

Up to 1,000 people were reported to have been rescued from beaches by boat overnight, but police could not confirm the number.

They said boats had ferried in 3,000 meals as well as fuel, water and medical assistance.

So far, no deaths or serious injuries have been confirmed.

Conditions across southern Tasmania today (January 5) were cooler than on Friday when Hobart reached 41.8C – its hottest since record keeping began in 1883.

World News: Armstrong may be on verge of admitting drug use