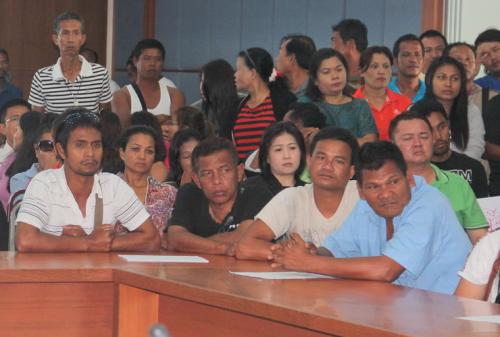 PHUKET: All Russian tour counters in the Kata-Karon beach areas have been ordered to close until further notice and the local Labor Office has been requested to investigate them for possible breach for foreign worker regulations.

The news came at a meeting at Kata-Karon Municipality yesterday, held to resolve the ongoing dispute between local tuk-tuk and taxi drivers and Russian companies operating tour counters in the area.

The dispute reached flashpoint on Thursday night when the drivers staged a blockade of the Karon beachfront road to protest Russian tour counters offering transport to tourists at fares cheaper than those charged by the local drivers.

Yesterday, scores of local taxi and tuk-tuk drivers, and operators of other local businesses that rely on tourism, crowded the meeting room at the Kata-Karon Municipality offices.

Many of them brandished placards with slogans such as “Russians [are] stealing Thai jobs” and “We don’t want Russian businesses”.

After hearing the complaints, Karon Police Deputy Superintendent Narong Laksanawimon explained, “We have ordered the Russian tour operators to temporarily close their counters until we are able to find a solution to this problem.”

Phuket Vice Governor Somkiet Sangkaosuttirak ordered officers from the Phuket Provincial Employment Office, who were present at the meeting, to investigate claims that Russian tour operators had foreigners providing massage services, an occupation that is by law reserved for Thais only.

However, V/Gov Somkiet also explained to the protesters that operating tour counters was not a protected occupation.

“The tuk-tuk, taxi and tour company operators understand that operating a tour company is not an occupation reserved for Thais, but they do want us to ensure a balance is maintained so that foreign tour companies do not adversely affect or cause problems for local business operators,” he told the Phuket Gazette.

“I have assigned the relevant organizations to be more strict in issuing work permits to foreign tour companies. I have also called for the relevant agencies and officers to meet again to discuss this problem next week,” he added.