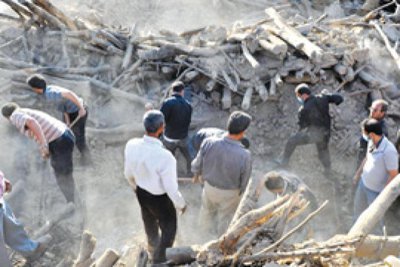 PHUKET: The death toll after two devastating earthquakes struck northwestern Iran over the weekend has risen to at least 306, the country’s ministry of health said yesterday. More than 3,000 people have been injured and tens of thousands are in need of assistance.

The first earthquake at 3:53pm local time on Saturday had a magnitude of 6.2 on the Richter scale and was centered about 17 kilometers (10 miles) from the city of Ahar in East Azerbaijan Province, according to the Iranian Seismological Center. It was followed about 11 minutes later by a 6.0-magnitude earthquake. Both quakes struck at a depth of just 10 kilometers (6.2 miles).

The Iranian Red Crescent Society said at least 180 villages in the region were affected, including four villages which were completely destroyed. It is estimated that more than 5,000 buildings were seriously damaged, but teams were still surveying the affected area late yesterday afternoon.

Meanwhile, Health Minister Marziyeh Vahid Dastjerdi said that the death toll has risen to 306 while at least 3,037 people have been injured, of whom more than 1,200 have been hospitalized. The head of emergency services, Gholamreza Masoumi, told the semi-official Fars News Agency that more than 4,500 people were injured.

Martin Nesirky, the spokesman for United Nations (UN) Secretary-General Ban Ki-moon, said Ban is “deeply saddened” by the casualties and widespread destruction. “He extends his sincere condolences to the Iranian government and people, particularly the families of those who have been killed or otherwise affected in this disaster,” he said.

Nesirky added: “The United Nations stands ready to lend its assistance to efforts to respond to humanitarian needs created by the disaster and to mobilize international support for that response.” A number of countries, including the United States, have also offered assistance for earthquake relief but no international assistance has been requested as of yesterday.

A number of representatives in Iran’s parliament has criticized the government’s emergency response. Some have pointed out that there has been a shortage of tents for survivors, but officials argued that most of the rescue operations were completed within 24 hours after the earthquakes. Some citizens have also complained that media coverage of the disaster was limited due to the Olympic Games in London.

Indeed, victims of the earthquake have started a “community page” requesting assistance in the form of blankets, sheets and clothes of different sizes ranging from infancy to adulthood.

Earthquakes, even light and moderate ones, often cause heavy damage and large numbers of casualties in certain parts of the country due to poor construction, especially when they hit during the night when most residents are sleeping.

In January, at least 230 people were injured when a moderate 5.5-magnitude earthquake struck about 10 kilometers (6.2 miles) northeast of Nishapur, a city in the province of Razavi Khorasan near the border with Turkmenistan. Officials said a number of buildings in nearby towns and cities were damaged or had collapsed, causing the injuries.

Prior to that, on December 20, 2010, at least seven people were killed and hundreds more were injured when a strong 6.5-magnitude earthquake struck 16 kilometers (9.9 miles) from the town of Hosein abad in Kerman Province, located in southeastern Iran. Scores of buildings were destroyed by the strong tremor.

Most notably, in December 2003, around 31,000 people were killed and more than 30,000 others were injured when a strong 6.6-magnitude earthquake struck near Bam. It left the area devastated with 85 percent of buildings damaged or destroyed in the city.