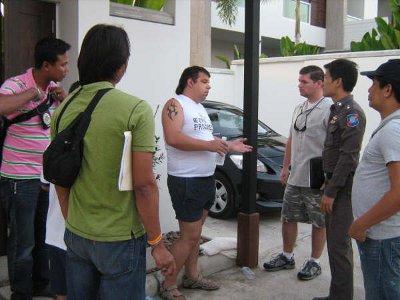 PHUKET: The trial of a Ukrainian man arrested in Phuket and recently extradited to the United States for alleged involvement in international distribution of child pornography over the internet has been postponed to November.

Maksym Shynkarenko, 33 at the time of his arrest, was taken into custody here in January 2009 at his luxury villa in Chalong through the collaborative efforts of the Phuket Tourist Police, the US Immigration and Customs Enforcement Agency, and the US Department of Homeland Security.

According to the Indictment, Shynkarenko handed over tens of thousands of pictures and videos containing images of children, ranging in age from infants to teenagers, being sexually assaulted and abused. The images were submitted by subscribers to his child hardcore sex sites.

“Shyknarenko’s extradition from Thailand to a New Jersey courtroom is a milestone in one of our most important fights – keeping our children safe from harm,” said US Attorney Paul Fishman.

Upon accessing the “Illegal.CP” website, the initial page warned subscribers as follows:

FAQ, Please read. “Our site is considered to be illegal in all countries….
Even if you ever have problems with police, you can always say that
someone had stolen the information from your credit card and used it. It is
very difficult to establish that you were the person to pay.”

The subsequent investigation of subscribers to “Illegal.CP” has led to the arrests of numerous individuals who were actively molesting children, read the press release.

“Distributors and consumers of child pornography create a market for sexual assaults on children, where the victimization of those children is refreshed with every download,” US Attorney Fishman said.

Shynkarenko has entered a plea of not guilty to all charges against him.

Also, Foreign Ministry spokesman Oleksandr Dikusarov said on June 12 that Ukrainian investigators “did not find anything” that would constitute a crime in Shynkarenko’s actions, reported AP.

However, if Shynkarenko is found guilty on all counts, he faces more than 500 years of imprisonment and millions of dollars in fines.