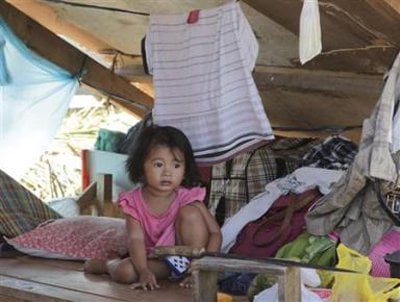 PHUKET: The death toll from the strongest typhoon to hit the Philippines this year has climbed above 900 while hundreds more, many of them tuna fishermen, remain missing and are feared dead, emergency management officials confirmed today.

Benito Ramos, the Executive Director of the National Disaster Risk Reduction and Management Council (NDRRMC), said rescue workers have so far recovered the remains of 902 people after Typhoon Bopha made landfall in southern provinces on December 4. About 335 bodies are still unidentified.

In addition to the large number of fatalities, at least 635 people, among them more than 300 tuna fishermen, remain missing and most of them are feared to have been killed. The Philippine Navy has so far been able to recover 35 bodies from the sea, though some authorities are hopeful some of the fishermen are still alive.

“The good news is that we also coordinated with the Indonesians because when we assessed the situation there is a possibility that some of our missing fishermen drifted to the Indonesian waters,” said Captain Robert Empedrad, the commander of the joint task force for maritime search and rescue. “We requested the government of Indonesia to send ships.”

The Philippine Navy believes missing fishermen may have drifted 100 nautical miles east of Bislig Island, and the prevailing wind condition in the northeast may have pushed them into Indonesian waters. Navy officials believe some fishermen may have had enough food and water to survive at sea for a number of days.

The magnitude of the disaster is a challenge for the Philippines as more than 60,000 houses have been destroyed while more than 88,000 others have been damaged. It is estimated that nearly 5.5 million people across 30 provinces have been affected by Bopha, and 79,800 people were still inside evacuation centers on Thursday.

Bopha, which is locally known as Typhoon Pablo, was part of the 2012 Pacific typhoon season which runs throughout 2012, with most tropical cyclones forming between May and November.