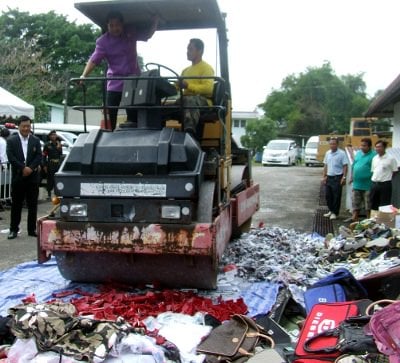 PHUKET: Phuket Customs destroyed an estimated 29 million baht’s worth of pirated goods yesterday as part of their ongoing battle to protect intellectual property rights on the island.

“The 9,762 counterfeit items destroyed today are from 44 closed cases related to pirated goods. They were seized on Phuket between October 2011 and September 2012,” said Customs Department director-general Benja Luicharoen, who chaired the ceremony.

The counterfeit items were destroyed through a variety of methods, including destruction by hammer and knife, as well as mass destruction by way of a road roller.

“We are continually arresting those involved with selling and distributing pirated goods in order to protect society from counterfeit items. We are also keeping inline with our department’s policy, which follows the Agreement on Trade-Related Aspects of Intellectual Property Rights [TRIPS] of the World Trade Organization,” said Ms Benja.