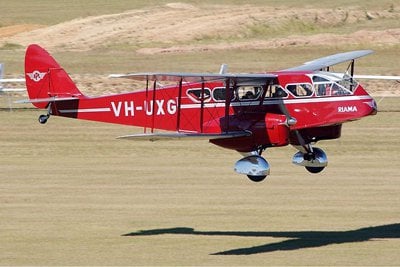 
6 confirmed dead after vintage plane wreck found in Australia
Phuket Gazette / News Wires
PHUKET: All six people on board a vintage 1930s biplane which went missing over a huge stretch of bushland this week were confirmed dead yesterday after the wreckage was found in a forest in the Australian state of Queensland, rescue workers said.

The red 1934 De Havilland biplane had taken off from the town of Monto, about 345 kilometers (214 miles) northwest of Brisbane, shortly after 11am local time on Monday and was en-route to an airport in Caboolture near Brisbane where it was due to land at around 3:15pm local time.

The aircraft’s emergency radio beacon was briefly activated at approximately 1:30pm on Monday but it was not possible to determine where the signal came from because it was not equipped with a GPS. It prompted a massive search-and-rescue operation involving 15 helicopters and a Dornier aircraft.

An AGL Action rescue helicopter sighted the red biplane north of Borumba Dam just before 2pm yesterday, and a search team confirmed there were no survivors. The search area had initially covered approximately 540 square nautical miles (1,854 square kilometers) in a bushland region west of Gympie and south of Nambour.

“The bodies of six people were located at the site,” a Queensland police spokesperson said. “Police are guarding the scene overnight, and will return to the site in the morning to continue investigations into the crash.”

The crash area had become the main target for rescue workers after a signal was picked up from one of the victim’s cellphones. Photos from the site, located in a dense forest, showed the aircraft completely disintegrated when it hit the ground.

Queensland Police previously said the aircraft was carrying three men and three women who were all from southeast Queensland. The pilot was identified as 68-year-old Des Porter who had earlier on Monday given scenic flights in his prized aircraft at an airshow known as the Monto Fly-In.

It is believed that Porter, who is an experienced pilot, was just 10 years old when he survived a crash in the same plane. The accident in 1954 killed his father and brother, but Porter later found the aircraft disassembled in a hangar and put it back together, according to Australian media reports.