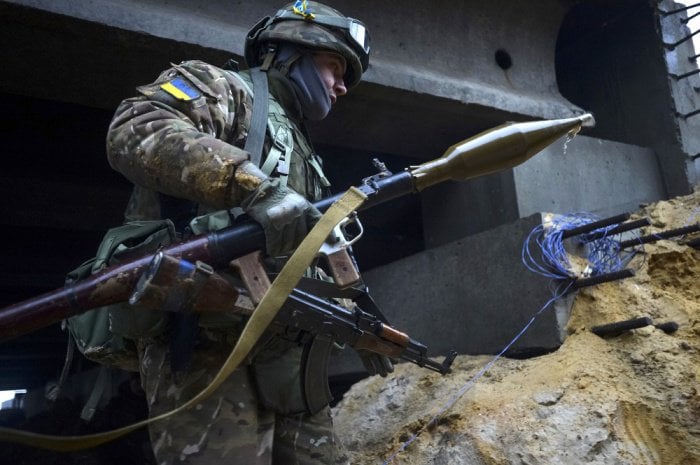 PHUKET: Diplomatic progress was made during four-way talks on the Ukraine crisis and an agreement was reached on establishing security zones between pro-Russian fighters and Kiev’s forces, German Foreign Minister Frank-Walter Steinmeier said.

“Finally there was an agreement reached today that the demarcation line, mentioned in the Minsk protocol, will be the line from which the withdrawal of heavy weaponry should start now,” Steinmeier said late on Wednesday after talks with his counterparts from France, Russia and Ukraine.

Still, Steinmeier added: “A lot depends on the question if that what we have agreed on will not only remain printed paper, but will also change the situation on the ground.”

In a joint statement released by the German foreign ministry, the ministers noted “with serious concern” that fighting in eastern Ukraine had severely escalated, causing the loss of many human lives including civilians.

“This must stop immediately and the regime of quiet must be restored,” the statement said, adding that the ministers called on all actors on the ground to fully respect it. That included withdrawal of heavy weapons in accordance with the contact line as stipulated in the Minsk peace plan.

The ministers said tangible progress on the full implementation of the Minsk protocol had to be achieved before a planned summit could take place. That included an effective cease-fire, an agreement on the delivery of humanitarian aid and continuation of the release of detainees.

The four ministers reiterated support for the Ukraine contact group and called on signatories of the Minsk peace plan to meet in the coming days to implement the ceasefire and withdrawal of heavy weapons.

They also called for formation of working groups to address relevant aspects of the Minsk agreements.

Earlier on Wednesday, Chancellor Angela Merkel said the goal of the Berlin talks was to try to reschedule a summit of the four countries in the Kazakh capital Astana, which was called off last week due to renewed fighting.

Kiev and Moscow blame each other for failing to implement a ceasefire agreed in Minsk last September to end the conflict in eastern Ukraine, where more than 4,700 have died in fighting between the Ukrainian army and pro-Russian rebels.

Ukraine’s President Petro Poroshenko, speaking at the World Economic Forum in Davos on Wednesday, said Russia had 9,000 troops on Ukrainian soil and he called on Moscow to withdraw them.

No evidence so far of terrorism in AirAsia crash