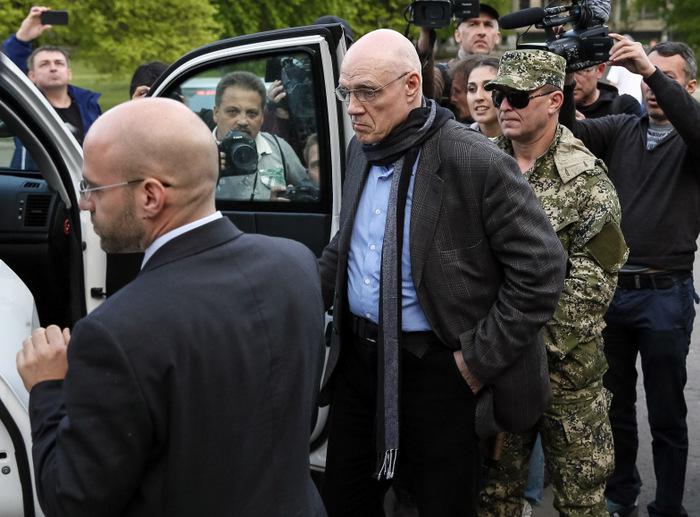 PHUKET: Pro-Russian rebels in Ukraine freed a Swedish observer on Sunday, but said they had no plans to release seven other European monitors they have been holding for three days.

On the eve of an expected announcement of a mild tightening of Western sanctions against a targeted list of Russians, U.S. President Barack Obama called for the United States and Europe to join forces to impose stronger measures to restrain Moscow.

In Donetsk, where pro-Russian rebels have proclaimed an independent “people’s republic”, armed fighters seized the headquarters of regional television and ordered it to start broadcasting a Russian state TV channel.

Washington and Brussels are expected, possibly as early as Monday, to add new people and firms close to Russian President Vladimir Putin to a small list of those hit by punitive measures. But they have yet to reach a consensus on imposing wider sanctions that would hurt Russia’s economy more generally.

Speaking during a visit to Malaysia, Obama said the impact of any decision over wider sanctions would depend on whether the United States and its allies could find a unified position.

“We’re going to be in a stronger position to deter Mr. Putin when he sees that the world is unified and the United States and Europe is unified rather than this is just a U.S.-Russian conflict,” Obama told reporters.

The stand-off over Ukraine, an ex-Soviet republic of about 45 million people, has dragged relations between Russia and the West to their lowest level since the end of the Cold War.

After Ukrainians overthrew a pro-Russian president, Putin overturned decades of international diplomacy last month by announcing the right to use military force on his neighbour’s territory. He has seized and annexed Ukraine’s Crimea peninsula and massed tens of thousands of troops on the frontier.

Heavily armed pro-Russian gunmen have seized buildings in towns and cities across eastern Ukraine. Kiev and its Western allies say the uprising is directed by Russian agents. Moscow denies it is involved and says the uprising is a spontaneous reaction to oppression of Russian speakers by Kiev.

An international agreement reached this month calls on rebels to vacate occupied buildings, but Obama said Russia had not “lifted a finger” to push its allies to comply.

“In fact, there’s strong evidence that they’ve been encouraging the activities in eastern and southern Ukraine.”

The Organisation for Security and Cooperation in Europe has sent unarmed monitors to try to encourage compliance with the peace deal. The pro-Russian rebels seized eight European monitors three days ago and have been holding them at their most heavily-fortified redoubt in the town of Slaviansk.

One of them was permitted to leave on Sunday after OSCE negotiators arrived to discuss their release. The freed man got into an OSCE-marked car and drove away. A separatist spokeswoman said the prisoner, a Swede, had been let go on medical grounds, but there were no plans to free the rest.

The captives were shown to reporters on Sunday and said they were in good health.

“We have no indication when we will be sent home to our countries,” Colonel Axel Schneider told reporters as armed men in camouflage fatigues and balaclavas looked on. “We wish from the bottom of our hearts to go back to our nations as soon and as quickly as possible.”

The observers, from Germany, Denmark, Poland and the Czech Republic as well as Sweden, were accused by their captors of spying for NATO and using the OSCE mission as a cover.

The OSCE, a European security body, includes Russia as well as NATO members, and its main Ukraine mission was approved by Moscow, although the Europeans held in Slaviansk were on a separate OSCE-authorised mission that did not require Russia’s consent. Western countries say Russia should do more to prevail upon their pro-Russian captors to free the men.

Vyacheslav Ponomaryov, the rebel leader who has declared himself mayor of Slaviansk, has described them as prisoners of war and said the separatists were prepared to exchange them for fellow rebels in Ukrainian custody.

Washington is more hawkish on further sanctions than some of its European allies, which has caused a degree of impatience among some U.S. officials. Many European countries are worried about the risks of imposing tougher sanctions: the EU has more than 10 times as much trade with Russia as the United States and imports about a quarter of its natural gas from Russia.

British Foreign Secretary William Hague said in coming days there would be “an expansion of existing sanctions, measures against individuals or entities in Russia”.

At the Donetsk television headquarters, about 400 pro-Russian demonstrators chanted “Russia! Russia!” and “Referendum!” – a call for a vote like one in Crimea that preceded its annexation by Russia last month. Four separatists in masks controlled access at the entrance, and more masked gunmen in camouflage fatigues could be seen inside.

Oleg Dzholos, the station’s director, who came outside to speak to reporters, said the people who seized the building had ordered him to change the programming.

“They used force to push back the gates,” he said. “There were no threats. There were not many of my people. What can a few people do? The leaders of this movement just gave me an ultimatum that one of the Russian channels has to be broadcast.”

Ponomaryov, the rebel leader in Slaviansk, said his men had captured three officers with Ukraine’s state security service who, he said, had been mounting an operation against separatists in the nearby town of Horlivka.

The Russian television station Rossiya 24 showed footage it said was of a colonel, a major and a captain. They were shown seated, with their hands behind their backs, blindfolded, and wearing no trousers. At least two had bruises on their faces.

Ukraine’s State Security Service said the three had been part of a unit which went to Horlivka to arrest a suspect in the murder of Volodymyr Rybak, a pro-Kiev councillor whose body was found last week in a river near Slaviansk.