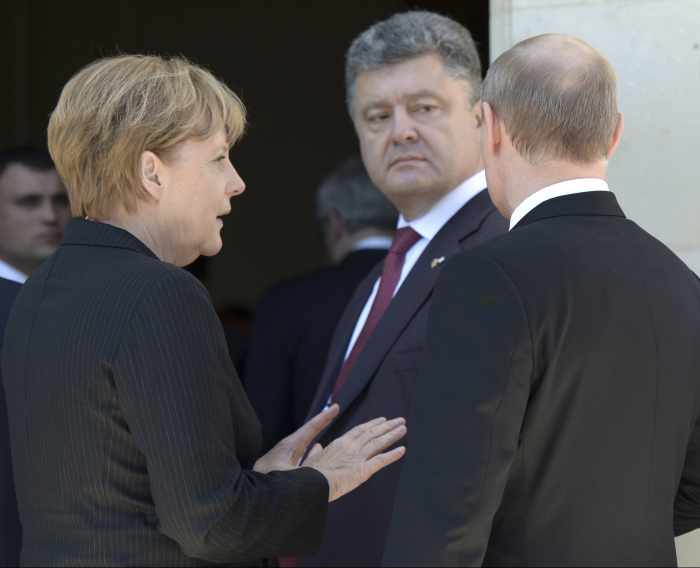 PHUKET: The leaders of Russia and Ukraine held their first talks on Friday since Moscow annexed Crimea, discussing ways to end their four-month conflict in a brief encounter during commemorations in France of the World War Two D-Day landings.

French President Francois Hollande and German Chancellor Angela Merkel brought together Russia’s Vladimir Putin and Ukrainian president-elect Petro Poroshenko for a 15-minute meeting before they joined other dignitaries for lunch.

The meeting was the culmination of weeks of secret diplomacy by French officials to try to break the ice in the most serious European security crisis since the end of the Cold War.

Hollande’s office said Putin and Poroshenko shook hands and agreed that detailed talks on a ceacefire between Kiev government forces and pro-Russian separatists in eastern Ukraine would begin within a few days.

They also discussed steps such as Russian recognition of Poroshenko’s election as well as economic relations.

Poroshenko was photographed looking unsmiling and earnest as he stood with Putin and Merkel.

“It was a normal, serious exchange between two leaders,” an official in Hollande’s office said.

“This marks tentative progress which he (Hollande) welcomes, particularly given this occasion so symbolic for peace.”

In Moscow, a Kremlin spokesman said the two leaders urged a “speedy end to the bloodshed in southeastern Ukraine as well as to fighting on both sides”.

“It was confirmed that there is no other alternative to resolve the situation than through peaceful political means,” the spokesman said.

Hollande had invited Poroshenko to Normandy as his personal guest at the last minute in an effort to break the ice between Moscow and Kiev even as fighting continues in eastern Ukraine between government forces and pro-Russian separatists.

A White House official said Putin and Obama, who had avoided contact with the Russian leader while the two were in Paris on Thursday – also spoke to each other before the lunch.

World leaders and veterans paid tribute to soldiers who fell in the liberation of Europe from Nazi German rule, at a series of ceremonies around the Normandy beaches where allied forces landed 70 years ago on June 6, 1944.

Wreaths, parades and parachute-drops honoured history’s largest amphibious assault, in which 160,000 U.S., British and Canadian troops waded ashore to confront German forces, hastening its defeat and the advent of peace in Europe.

Flanked by stooped war veterans, some in wheelchairs, Obama earlier joined Hollande to commemorate victory and reaffirm U.S-French solidarity before the 9,387 white marble headstones of fallen U.S. soldiers at the Normandy American Cemetery.

It will be the last major commemoration for most of the veterans, most of whom are in their late 80s and 90s.

Obama said the 50-mile (80 km) stretch of Normandy coastline – where allied soldiers landed under fire on beaches codenamed Omaha, Utah, Gold, Sword and Juno – was a “tiny sliver of sand upon which hung more than the fate of a war, but rather the course of human history.”

“Omaha – Normandy – this was democracy’s beachhead,” said Obama. “And our victory in that war decided not just a century, but shaped the security and well-being of all posterity.”

The president sought to link the sacrifices of World War Two to U.S. servicemen killed in combat since the Sept. 11, 2001 attacks on the United States by al Qaeda Islamist militants.

The “9/11 generation of service members” understood that “people cannot live in freedom unless free people are prepared to die for it”, he said.

Hollande declared that France “would never forget the solidarity between our two nations, solidarity based on a shared ideal, an aspiration, a passion for freedom”.

Twenty-one foreign leaders attended the commemorations, including Britain’s Queen Elizabeth and Prime Minister David Cameron, Canada’s Stephen Harper as well as Merkel and Putin, whose country suffered the heaviest casualties and struck decisive blows on the eastern front to defeat the Nazis.

But while the unity of allies and their bloody sacrifices were the central theme of D-Day remembrance, private talks among government leaders focussed on the most serious security crisis in Europe for more than two decades: Ukraine.

Russia’s annexation of Crimea in March and the standoff in eastern Ukraine have plunged Moscow’s relations with the United States and European Union to a post-Cold War low.

Fighting continued in eastern Ukraine as Ukrainian forces fended off an attack by pro-Russian separatists on a border post there late on Thursday. The attack was repelled by air strikes but the insurgency has escalated in the past two weeks, killing scores and prompting some families to flee.

Russia announced on Thursday it was sending its ambassador to Poroshenko’s inauguration on Saturday.

A Group of Seven (G7) summit of industrialised nations in Brussels on Thursday, from which Putin was excluded, urged Russia to work with Kiev’s new authorities to restore stability in eastern Ukraine or face possible tougher sanctions.

On Thursday, Obama told reporters the West would “have no choice to respond” with new sanctions if Russia failed to recognise Ukraine’s new government and work to calm pro-Russian gunmen in its former Soviet neighbour.

“There is a path in which Russia has the capacity to engage directly with President Poroshenko now. He should take it.”

Behind the facade of G7 unity, differences emerged over a 1.2 billion euro (974 million pounds) French contract to sell two Mistral helicopter carriers to Russia. Obama said Paris should have pressed “the pause button” on the deal but Foreign Minister Fabius said the contracts would be honoured.