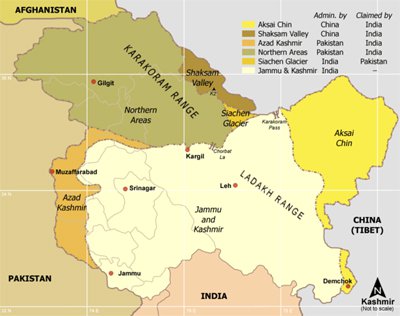 The governments of Pakistan and India are considering a proposal to demilitarize the border of the disputed region of Kashmir, according to media reports yesterday.

A senior Pakistani foreign ministry official told The Express Tribune that Pakistan has proposed the redeployment of heavy weaponry along the Line of Control (LoC), the de facto border that divides the Pakistani and Indian-administered regions of Kashmir.

“We (Pakistan) have proposed to redeploy artillery and mortar 30 kilometers (18.6 miles) away from the LoC,” the official said on condition of anonymity.

The proposal is an effort by both countries to demilitarize the disputed Himalayan region, where in the past the two sides often exchanged fire, leaving hundreds killed. The official added, however, that discussions on the proposal were in their initial stages and no major breakthrough is expected during the ongoing round of talks.

The suggestion is part of several other proposals being discussed at the two-day talks in Islamabad between senior officials from the two sides on conventional and nuclear confidence building measures (CBMs). The talks, part of the peace process, resumed earlier this year after India had halted them following the 2008 attacks in Mumbai.

Although cross-border attacks in Kashmir are now a rarity because of a ceasefire the two countries agreed to in 2003, fatal firing incidents still occur.

A guerrilla war has been going on in India-administered Kashmir between militants, who have been blamed for attacks, and the Indian troops, who have been accused of rights abuses.

The Indian government says more than 45,000 people – including civilians, militants and troops – have died in the region over the past two decades.

Police in northern Afghanistan have rescued a young girl who had been locked up in a toilet for at least half a year and was frequently beaten for refusing to have sex with men, local media reported yesterday.

The 15-year-old girl, who was identified as Sar Gul, married 30-year-old Mohammad Azim about nine months ago. She had since been living with her husband and parents-in-law in Baghlan province, where she was frequently beaten and denied food.

The Pajhwok Afghan News (PAN) agency reported that about six months ago Gul was locked inside the toilet after she had refused to have sex with men who were brought to the home by her parents-in-law. The victim’s parents, who live in Badakhshan province, recently discovered the situation and informed police who freed her.

Following her rescue, officials took Gul to the Pul-i-Khumri Civil Hospital where she is being treated for severe mental stress. She is also being treated for various injuries, including burns across her body. All of her nails had been pulled off with pliers.

Hospital chief Dr Gul Mohammad Wardak told the news agency that the girl was in a critical condition and may be transferred to the capital of Kabul in order to receive further treatment. The report said Gul’s mother-in-law had been arrested, but her husband was able to flee.

It was not immediately clear if Gul’s husband would also face arrest.

An Egyptian court has suspended the practice of forcing female detainees arrested by the military police to undergo ‘virginity tests’, the Al-Ahram daily newspaper reported.

The verdict was returned yesterday afternoon (local Phuket time) after two women, Samira Ibrahim and Maha Mohamed, who had been detained in March, filed a lawsuit calling for the revocation of virginity tests at military facilities. The 25-year-old Ibrahim, who was among seven female protesters who were subjected to these tests, is the only one who has publicly given an account of the abuse she underwent.

The female detainees were subjected to virginity tests after military forces dispersed a sit-in at Tahrir Square on March 9, arresting several protesters. Some of the women told Amnesty International that they were beaten, given electric shocks, subjected to strip searches while being photographed by male soldiers, then forced to submit to ‘virginity checks’ and threatened with prostitution charges.

During yesterday’s session, hundreds of political activists gathered before the building of the Administrative Court in solidarity with the abused women, holding placards that read “Egypt’s women are a red line.” After the session, Ibrahim and a host of other protesters celebrated in Tahrir Square.

The case sparked widespread condemnation from local and international human rights groups. Shortly after the incident, Amnesty International called on the Egyptian authorities to bring to justice those responsible for ordering or conducting virginity tests.

Months after the incident, a senior Egyptian general admitted during an interview that women detained on March 9 at Cairo’s Tahrir Square had been forced to undergo virginity tests. The general, speaking on condition of anonymity, justified the abuse by saying that the women “were not like your daughter or mine. These were girls who had camped out in tents with male protesters.”

The general also said that the reason for the ‘tests’ was because “[w]e didn’t want them to say we had sexually assaulted or raped them, so we wanted to prove that they weren’t virgins in the first place.”