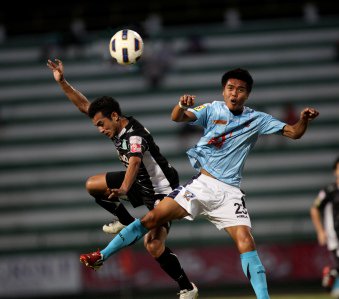 A local blog uses this woefully inappropriate simile in commenting on FC Phuket’s uncertain future and the aggressive actions of a few supporters at the club’s last home game.

Perhaps the blogger is unfamiliar with the variety of corner kicks used in the sport. Corner kicks, whether aimed high, low, short or long, have an intended direction and a few hit the net because they are what is known in the game as a “set piece”, i.e. planned – not random thumps in the hope of success.

The blog, in the same outburst, claims that “some journalists have actually defended their [Phuket fans] shoddy behavior.”

The blog’s use of myth and sensationalism in focusing its “reporting” on a minority of Phuket fans is regrettable. The Phuket Gazette has sought to stay faithful to basic standards of journalism and to bring its readers informative FC Phuket football news with direct quotes from both players and management.

We support our local football club because it brings Thai and foreign lovers of the game together for significant potential benefit to the community.

But we do join the bloggers in condemning any journalist who defends crowd violence or the hooligan element in sport. We are also adamant in our defense of motherhood.

In our opinion, negative media “reports” that simply focus on a few ‘rotten apples’ without looking at the bigger picture, have contributed to what could very well now become the end of Phuket’s football team.

It is asserted that Phuket fans have been banned from the club’s final home game, but no evidence is offered to support the claim as to either numbers or how the club would enforce such a ban.

It is also opined that “The lack of sportsmanship shown by Phuket fans is likely to discourage any potential backer from taking on the club.” In this, the blog conveniently overlooks the difference between the fans that took part in the incident at the stadium and those who did not. To many, this could indicate that all FC Phuket fans are hooligans, and that all are culpable should the club cease to exist.

Of course throwing bottles and other aggressive behavior is unacceptable, but rather than harping on the problem, why not seek enlightenment as to its cause? And why not be constructive with suggestions for a cure?

Mistakes by referees or assistant referees who are either unqualified or obtusely biased (or paid to be so) are the root of all evil in sport.

There is no excuse for bad refereeing.

Any town, city or country wishing for success in sports needs to understand that it’s not just about developing team and player talent. It also requires development programs for both coaches and officials.

Development of neutral, qualified referees must be a primary focus for local football.

And the community’s media should concentrate on supporting not only the efforts on pitch, but also those in the background to help the club achieve its goals and live its dream.

Political attacks against supporters serve no useful purpose – unless they’re simply for the sake of marketing a story.