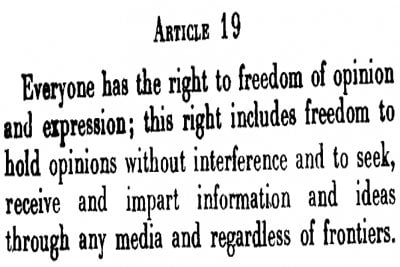 
Mexico: 172 attacks against journalists, 9 dead in 2011
PHUKET (News Wires): In 2011, at least 172 attack were carried out against Mexican journalists and media, according to press rights group Article 19.

The report, called ‘Forced Silence: the State, accomplice to the violence against the press,’ showed that last year was one of the most violent years for media outlets in Mexico, where nine journalists were killed and two others went missing. All of the attacks were apparently carried out due to the journalists’ work.

In addition, two media workers were killed, while at least eight attacks were carried out with firearms or explosives against media offices, the group said, as it criticized the government’s participation in diminishing the press and eroding freedom of expression.

“In the best scenario, journalists at risk have been protected inadequately,” the group said in a statement. “In the worst scenario, the same officials in charge of investigating and procuration of justice are the ones behind the actions against the freedom of press rights,” adding that in some cases, even accusing them of crimes without properly initiating proper investigations.

The highest number of attacks against journalists and media outlets were carried out in the state of Veracruz, with 29, representing a 200 percent increase, followed by Mexico City, 21, Chihuahua and Coahuila with 15, and Oaxaca, 11.

According to the United States Geological Survey’s (USGS) preliminary earthquake report, the epicenter of the quake, which had a depth of 17 kilometers, was in the state of Guerrero, around 186 kilometers (115 miles) east of the popular port city of Acapulco and about 25 kilometers (16 miles) east of Ometepec, both in the same state.

However, Mexico’s National Seismological Service (SSN) reported a 7.8-magnitude earthquake at around noon local time (1am today, Phuket time). The USGS later reported at least six aftershocks as of 1:30pm local time. Three of them registered a magnitude of 5.1 while the strongest was 5.3.

The strong earthquake was felt up to Mexico’s central region, as several buildings across Mexico City were completely evacuated.

Through his Twitter account, Mexican President Felipe Calderon said no major damage was reported, although part of a pedestrian crossing bridge collapsed and crushed a public transportation bus in the Atzcapotzalco area of Mexico City. No passengers were in the vehicle and the driver only suffered minor injuries.

News reporter Djatmiko Waluyo, who at the time of the earthquake was located in Mexico City’s Roma neighborhood, one of the older and traditional areas not far from downtown, described the powerful earthquake.

“The building began swerving from side to side and loud thumps were heard from the walls as they seemed to be cracking,” he said, adding that the sensation of dizziness lasted around 30 or 40 seconds as people rushed down the stairs and exited the building.

“The Medellin market was evacuated as well as groups of nervous people were hesitant to reenter the buildings.”

On September 20, 1985, one of the most devastating earthquakes struck the coastal area of Michoacan, although most of the damage was seen in Mexico City. Initial government reports indicated that from 6,000 to 7,000 people died, although further investigations revealed that approximately 10,000 people died.

The 8.1-magnitude earthquake completely or partially destroyed several important buildings such as the General Hospital of Mexico, the Televicentro building, which is now operated by Televisa, one of the country’s most important TV networks, as well as several residential buildings.

They are believed to be the latest victims of drug-related violence in the region.

Police were sent to the area after a call came in at 6:30am local time that human heads were lined up on the sidewalk of a street outside a slaughterhouse in the municipality of Teloloapan, which is located in Guerrero state in southwestern Mexico. Responding officers found a total of ten severed heads.

Other body parts were not found at the scene or in the nearby area, but investigators identified the heads as seven males and three females. “The partial identification suggests the victims were between 20 and 35 years of age,” a spokesperson for the state’s attorney general’s office said.

Two cardboard signs were also found at the scene, and officials said the text on them refers to conflicts between rival gangs, although the exact contents were not immediately released. Teloloapan is located in a region where the La Familia cartel and its offshoot Los Caballeros Templarios are fighting for territory.

According to official figures, more than 50,000 people have died in drug-related violence since President Felipe Calderón launched an army-led crackdown on organized crime and drug cartels in late 2006. At least 12,903 people died between January and September 2011, although figures for the entire year are not yet available. This will likely bring the total figure for 2011 to more than 17,000, the highest annual number yet.