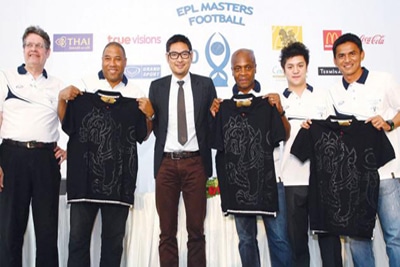 PHUKET (The Nation): Miss the trademark dribbling of former England international John Barnes? You could witness it at close quarters when the ex-Liverpool winger showcases some of his old tricks at the Standard Chartered EPL Masters Football Thailand Cup in May.

Joining him in the one-day six-a-side competition at Impact Arena on May 20 will be Newcastle old boy Faustino Asprilla as well as a bunch of former Liverpool and Manchester United players.

The 48-year-old Barnes, renowned for his silky dribbling skills down the left, will play for the Liverpool All Stars team alongside the likes of Steve McManaman and Robbie Fowler.

They will be up against the Manchester All Stars led by forward Andrew Cole and midfielder Nicky Butt, plus two more teams.

Colombian striker Asprilla, who won Most Valuable Player as top scorer in the previous edition, in Malaysia, will lead the EPL All Stars team, while former Thailand captain Kittisak “Zico” Senamuang and his fellow forward Piyapong Piew-on spearhead the local challenge.

The 38-year-old Kittisak, best remembered for his somersault goal celebrations, said fans should grab the chance to watch some of the sport’s biggest names play against local stars.

“It’s a nice opportunity for me to play with old national team-mates such as Tawan [Sripan] again. … We’ll try to make it a good game for the fans,” said Kittisak, who sat alongside Barnes and ex-Manchester United right-back Paul Parker at the press conference yesterday.

Tickets at 398 baht are available from Saturday at all McDonald’s branches. For more information: FootballFocusAsia.com or Facebook.com/Football-Focus-Asia, or 02-234 2232.