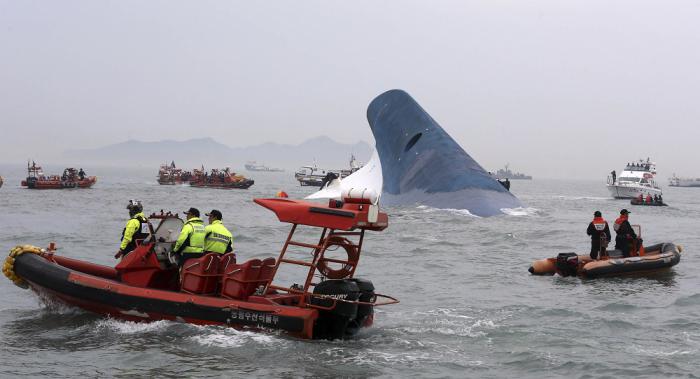 PHUKET: More than 300 people were missing after a ferry sank off South Korea, the coastguard said on Wednesday, with a three-fold increase in the number of passengers unaccounted for put down to a miscalculation by officials.

The ferry was carrying 477 people, of whom 164 were confirmed rescued, coastguard officials said. Two people were confirmed dead after the ferry listed heavily onto its side and capsized in apparently calm conditions off South Korea’s southwest coast.

The Ministry of Security and Public Administration had reported that 368 people had been rescued and that about 100 were missing.

It later described those figures as a miscalculation, turning what had first appeared to be a largely successful rescue operation into potentially a major disaster.

The cause of the disaster was not immediately clear.

Most of those on board were children and their teachers from a high school in Seoul on a field trip to Jeju island, about 100 km (60 miles) south of the Korean peninsula.

There were 477 people and 150 vehicles on board the ferry Sewol, officials said. Witnesses said many people were likely still inside the stricken vessel.

An official from the Danwon High School in Ansan, a Seoul suburb, had earlier said all of its 338 students and teachers had been rescued safely but that could not be confirmed by the coastguard or other officials involved in the rescue.

The school official asked not to be identified.

The ferry began to list badly about 20 km (12 miles) off the southwest coast as it headed for Jeju.

Within a couple of hours, television pictures showed the ship, Sewol, lying on its port side. Soon after the ship had completely capsized, with only the forward part of its white and blue hull showing above the water.

Coastguard vessels and fishing boats scrambled to rescue those on board, with dramatic television footage showing rescuers pulling passengers in life vests out of the water by hand as their boats bobbed beside the ferry’s hull.

Other terrified passengers were winched to safety by helicopters hovering overhead.

The ferry left from the port of Incheon, about 30 km (20 miles) west of Seoul, late on Tuesday.

A distress signal was sent from the ship early on Wednesday, the South Korean coastguard said, triggering a rescue operation that involved almost 100 coastguard and navy vessels and fishing boats, as well as 18 helicopters.

There was no immediate indication of what caused the ship to list and roll on its side, although one witness told YTN television there had been a “loud impact and noise” before it started sinking.

Heavy fog had set in overnight off the west coast, leading to the cancellation of many ferry services.

The coastguard said one person had been found dead inside the sinking ferry. An official from the Mokpo Hankook hospital on the mainland said another person had died soon after arriving at its emergency ward.

The ship, which also carries cars and trucks, has a capacity of about 900 people, an overall length of 146 metres (480 feet) and it weighs 6,586 gross tonnes. Shipping records show it was built in Japan in 1994.