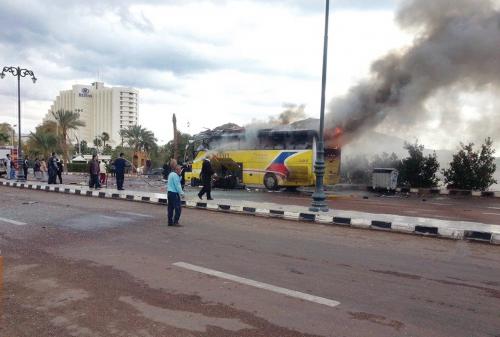 
Two Koreans and Egyptian driver die in Sinai tourist bus blast
Phuket Gazette / Reuters
PHUKET: A bomb on a tourist bus in Egypt’s Sinai killed at least two South Koreans and the Egyptian driver on Sunday, army and security sources said, in the first attack on tourists since an army takeover in July spurred an Islamist insurgency.

The Interior Ministry said the bus was travelling from St. Catherine’s Monastery, a popular tourist destination in the south Sinai, to nearby Israel when it was attacked.

It did not state the cause of the blast, in which another 24 people were wounded. Two security sources said a bomb had been detonated either inside or near the bus.

“This is a terrorist act that was carried out with an explosive device,” said an army source. Egyptian officials use the word “terrorist” to describe Islamist militants.

If militants were behind Sunday’s bombing, it would mark a shift in strategy to attacking “softer” tourist and economic targets. Egypt’s vital tourism industry has already been hit hard by three years of political turmoil and street protests.

Sisi, who is expected to announce his candidacy for the presidency soon, had hoped a political road map unveiled after Mursi’s overthrow would stabilise Egypt, which has a peace treaty with Israel and controls the Suez Canal, a busy world shipping channel on the Sinai’s western edge.

South Korea’s Foreign Ministry confirmed the two deaths of two of its nationals and said nine people had been wounded. It said 32 South Koreans were on the bus and that the tourists were Christians from the same church in South Korea.

The attack revived memories of an Islamist uprising in the 1990s that often targeted tourists and took years for then-president Hosni Mubarak to crush.

“I hope this will be an isolated incident that will not recur,” Egyptian Tourism Minister Hisham Zaazou told Reuters. “All the rest of the country is safe and secure, and what happened can happen anywhere in the world.”

Islamist militants launch near-daily attacks on security forces in northern Sinai, while the south, with its many Red Sea resorts, had been seen as a relatively safe tourist destination.

In 2004, a bombing at the Sinai resort of Taba killed 34 people, including Israeli tourists.

State television showed a photograph of the bus, its windows smashed and the roof partially torn off. Black smoke billowed from the site of the explosion on a palm tree-lined boulevard.

His Muslim Brotherhood says it is a peaceful group and denies any links with insurgents, who since July have also attacked targets in Cairo and other cities outside Sinai.

“The militants in Sinai are now looking for soft targets, without entering confrontation with police and armed forces, who have taken precautions,” said Mustapha Kamel Al-Sayid, a professor of political science at Cairo University.

“This is a cheap win for them without a high risk.”

While the army-installed government has driven the Brotherhood underground, it is struggling to cope with the militants in the Sinai, despite repeated army offensives.

The militants are scattered around a desert and mountain landscape they have mastered. Close links with bedouins and smugglers in the Sinai, an impoverished area long neglected by the central government, help them avoid capture.

The most prominent Sinai-based group, Ansar Bayt al-Maqdis, has claimed responsibility for several bombings, including an attempt to kill the interior minister in Cairo last year. The organisation also said it was behind a missile attack on a military helicopter last month that killed five soldiers.

Egyptian authorities have declared the Muslim Brotherhood a terrorist group and lump it together with the Sinai militants.

The Brotherhood condemned the attack on the bus, and said it would boycott the forthcoming presidential election.

“The military-backed authorities have, once again, failed to uphold their duty of protection and care towards visitors and Egyptian citizens alike,” it said in a statement issued by its London media office.