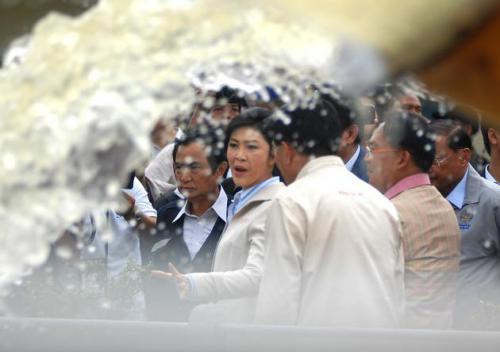 The eight provisions, implemented on the direct orders of the prime minister, are divided into immediate and post-flood action, including the prevention of flooding in key areas not yet inundated. Other areas to be dealt with include the repairing of roads and damaged public property, the inspection of flood-caused damage, security for people in flood shelters, post-flood medical treatment, and the prevention of water-borne diseases.

Yingluck, who as defence minister is head of the Defence Relief Operations Centre, has also signed an order to activate a large number of military-owned water pumps and other pieces of flood-prevention equipment to be used in flood drainage operations in Chachoengsao, now heavily submerged.

The pumps are also being used in eastern and western Bangkok to drain away shallow floodwater.

After two days of heavy rain brought by Storm Nari, Chachoengsao is now severely flooded. Residents living along the swelling Bang Pakong River have either been evacuated or moved to the second floors of their properties. The situation could worsen during the peak high tides on November 6-8, as the province is near the Bang Pakong Estuary.

The national flood update said yesterday that a total of 22 provinces have now been flooded, covering 4,109 villagers in 93 districts. Meanwhile floodwater in another 24 provinces is dissipating.

The flood-caused casualties reached 61 yesterday with a total of 674,952 people in more than 236,757 households affected by the national disaster. Bangkok Governor Sukhumbhand Paribatra said water gates run by the Bangkok Metropolitan Administration, especially those located in the suburbs, would remain closed for the time being to curtail flooding in the capital.

However, they would later be opened to help ease flooding in neighbouring provinces, including Chachoengsao, he said.

Meanwhile, the Chao Phraya River in Ayutthaya has swelled another 5cm, but has not yet reached a critical level.

Seven of Ayutthaya’s 16 districts have been declared disaster zones, entitling them to a portion of the Bt40-million emergency-relief budget.


Bt30 billion refunded under first-car scheme
The Nation / Phuket Gazette
PHUKET: About Bt30 billion was refunded to 500,000 people who bought cars under the government’s first-car scheme, while the fourth quarter of this year is expected to see Thailand’s car production hit 600,000 units with the prospect of production during the year exceeding 2.55 million units, according to the Excise Department.

Somchai Poolsavadi, director-general of the department, said that the rebate continued as expected with a total budget of Bt40 billion for fiscal year 2014.

The Comptroller-General’s Department has made total refund of about Bt30 billion to 500,000 buyers under the first-car scheme.

Some first-car buyers have experienced delay in receiving their rebates due to the information-checking process, he conceded.

“Usually, a buyer will receive the rebate one month after a year of ownership. However, buyers in some areas have seen some delays due to the manual inspection process,” he said.

Presently, cases are being filed against two buyers who did not meet the conditions of the first-car scheme.

“Some of these pre-orders may have been dropped given the large number of new models and attractive campaigns,” Somchai said.

Surapong Paisitpatnapong, spokeman for the Federation of Thai Industries (FTI)’s Automotive Industry Club, said that about 130,000 pre-orders under the first-car policy were with car dealers. The Excise Department and car dealers have asked customers through short message services and direct contact whether or not they would exercise their rights.

“Some customers have not received the cars under the first-car scheme as now car camps are offering campaigns for cars, especially pickups, with more benefits. Recently, dealers said that some models in stock have started to ease with the exception of small-sized cars,” Surapong said.

Pre-orders continue to rise, but financing has become more stringent. About 20-30 per cent of total pre-orders failed to pass credit approval.

As discussed with car camps, he said the Thai car market could see a normal situation after ending the first-car policy. Total car sales are estimated at 80,000-120,000 units per month.

Based on this year’s estimated 4-per-cent economic growth, the Excise Department’s revenue may reach its target, mainly due to domestic consumption. The main excise items include cars, liquor, beer and tobacco,” he said.

The recent increase in tax levied on liquor could boost an annual increase of Bt10 billion to Bt15 billion in tax collection. In the past one to two months, consumption has not yet risen as there was an adjustment period for operators. However, the Excise Department will assess the result later this year, which is the high season for tourism.


Peace a priority whichever way Preah Vihear ruling goes: PM
The Nation / Phuket Gazette
PHUKET: Prime Minister Yingluck Shinawatra yesterday pledged to cooperate with Cambodia to keep the peace along the Thailand-Cambodia border whatever the ruling handed down by the International Court of Justice (ICJ) in the upcoming Preah Vihear territorial-dispute case.

“The two countries will try to cooperate to keep peace along the border,” Yingluck said.

The ICJ is scheduled to deliver its ruling on November 11, after Cambodia asked the court in April 2011 to interpret its 1962 judgement to clarify which areas around the temple came under Cambodian sovereignty. Yingluck said both Thailand and Cambodia wanted to see the area remain peaceful.

General Nipat Thonglek, permanent secretary for the Defence Ministry, said Yingluck, in her capacity as the defence minister, would not be expected to travel to The Hague to hear the ruling.

Nipat said Yingluck would chair a meeting of the concerned government agencies on Monday to discuss how to maintain law and order along the border on the day of the ICJ’s ruling.

An Army source said Intelligence from the Second Army Region showed that Cambodian troops withdrawn from Preah Vihear early this year had returned to the area around the ancient temple three days ago.