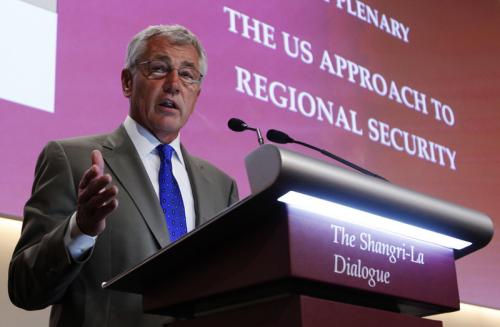 
U.S. rebalance to Asia-Pacific gaining steam, Pentagon chief says
Reuters / Phuket Gazette
PHUKET: The U.S. military will devote more air power, ground troops and high-tech weaponry to the Asia-Pacific region as it moves ahead with a strategic rebalance, the U.S. defence chief said on Saturday in a speech that accused China of cyber incursions.

In remarks laying out his vision for regional security, Defence Secretary Chuck Hagel assured allies and partners at the annual Shangri-La Security Dialogue in Singapore that the United States was fully able to continue its strategic pivot to the region despite budget constraints at home.

“It would be unwise and short-sighted to conclude … that our commitment to the rebalance cannot be sustained,” he said in prepared remarks, noting the United States represented 40 percent of global defence spending even under the “most extreme budget scenarios.”

Hagel sketched out some of the region’s thorniest security issues, including North Korea’s effort to develop nuclear weapons and missiles, competing territorial claims in the seas around China and disruptive activity in space and cyberspace.

While noting U.S. concerns about cyber intrusions linked to the Chinese government and military, Hagel underscored his belief that resolving many regional security issues would require closer cooperation between Washington and Beijing.

“Building a positive and constructive relationship with China is … an essential part of America’s rebalance to Asia,” he said. “While the U.S. and China will have our differences … the key is for those differences to be addressed on the basis of a continuous and respectful dialogue.”

The speech to the Asian security summit was Hagel’s first as defense secretary. But as a U.S. senator he was an early supporter of the event, led the U.S. congressional delegation to the inaugural session a dozen years ago and has addressed the group several times.

Hagel emphasized U.S. efforts to deepen ties with allies and partners in the region through both bilateral and multilateral engagement. He announced he was inviting defense ministers from the ASEAN grouping of nations to a first-ever U.S.-hosted meeting in Hawaii next year.

“Relationships, trust and confidence are what matter most in the region,” Hagel said.

The U.S. defense chief used the speech to underscore his long experience with Asia – from his military service in Vietnam, to business travels in China as a cell phone executive to later visits to the region as a U.S. senator.

“What I took away from all these experiences was a firm belief that the arc of the 21st century would be shaped by events here in Asia,” Hagel said, adding that was clear the United States would need to rebalance its resources toward the region once it ended its wars in Iraq and Afghanistan.

Hagel’s predecessor, Leon Panetta, told the Shangri-La gathering last year that the United States would commit 60 percent of its naval forces to the Asia-Pacific by 2020, a shift of about eight ships from the current deployment.

Building on that, Hagel told the conference the U.S. Air Force would commit 60 percent of its overseas-based aircraft and airmen to the region – about the same level as now – while U.S. Army troops and Marines would resume their Asia-Pacific roles as they draw down following the wars in Iraq and Afghanistan.

Hagel said in the future the Pentagon would “prioritize deployments” of its most advanced weapons systems to the Pacific, including the radar-evading F-22 Raptor jet fighter, the stealth F-35 Joint Strike Fighter and the Virginia-class fast attack submarine.

He indicated the region could soon see other advanced systems as well, noting the Navy planned to deploy a directed energy laser weapon on the USS Ponce next year and last month successfully launched an experimental jet drone from an aircraft carrier for the first time.

“Combined with new concepts, doctrine and plans that integrate these new technologies and other game-changing capabilities, we will ensure freedom of action throughout the region well into the future,” Hagel said.

The patient was in good condition and was being monitored in isolation, the ministry said in a statement. He was admitted to a hospital in Tuscany with a high fever, a cough and breathing difficulties.

A resident of Italy with foreign nationality, the man recently spent 40 days in Jordan where one of his sons was suffering from an unspecified flu.

Saudi Arabia has been the most affected by the virus, with 39 cases and 25 deaths so far, according to data from the World Health Organisation.

The virus, which can cause coughing, fever and pneumonia, has spread from the Gulf to France, Britain and Germany. The WHO has called it the Middle East Respiratory Syndrome Coronavirus (MERS-CoV).

It is from the same viral family that triggered the outbreak of Severe Acute Respiratory Syndrome (SARS) that swept the world in late 2003 and killed 775 people.


Tornado touches down near Oklahoma City, emergency declared
Reuters / Phuket Gazette
PHUKET: A “large and extremely dangerous” tornado that touched down west of Oklahoma City on Friday, causing some damage, was headed toward the city, and a tornado emergency has been declared in the area, the National Weather Service said.

Weather Service meteorologists and storm spotters were tracking the tornado just west of Yukon, a suburb of Oklahoma City, the agency said in a statement. They said it touched down on Interstate 40 and was headed toward Oklahoma City.

Oklahoma television station KFOR reported that the twister had overturned vehicles and done other damage.

The National Weather Service declared a tornado emergency, which is more serious than a warning, for communities west of Oklahoma City including Yukon.

Will Rogers Airport in Oklahoma City has been shut down, and was sheltering 1,200 people, local station KWTV reported.

The Weather Service had earlier issued a tornado watch for parts of Oklahoma, describing weather conditions as “particularly dangerous” a day after more than a dozen reported twisters ripped through the region.

Forecasters said several intense tornadoes were likely, along with storms bringing hailstones of up to 4 inches (10 cm) and damaging wind gusts that could reach 80 miles per hour (129 kph).

“An extremely unstable air mass has developed across much of Central (and) Eastern Oklahoma,” the weather service said in an advisory. “This will likely result in rapid development of severe thunderstorms this afternoon and evening.”

Forecasters said the winds would pose an increasing threat through the evening and urged residents to watch for severe weather.

“This is a particularly dangerous situation,” the advisory said.

Storms in Oklahoma and Arkansas on Thursday left an Arkansas county sheriff dead and at least one man missing in an attempted water rescue, while at least seven other people