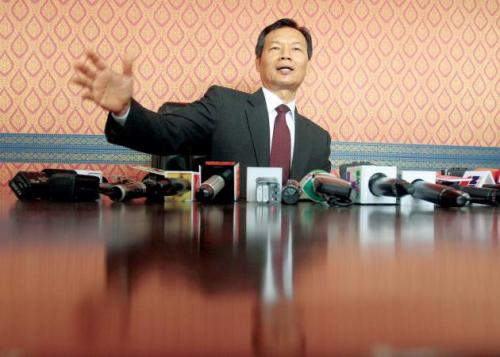 However, Government Spokesman Teerat Ratanasevi posted on Twitter that PM’s secretary-general Suranand Vejjajiva had ordered the PM’s Office’s legal expert to study the ruling closely, and an appeal against the ruling was expected.

A Government House source, who asked not to be named, said it was expected that it would take time to present testimonies during a hearing by the Supreme Central Administrative Court and the ruling might not be made until next year, after Thawil retires. The court ruling, hence, would have no effect on Thawil’s successors as NSC chiefs.

A joyful Thawil said the ruling would serve as a precedent for permanent officials to fight against unfair transfers.

If the prime minister appeals and the Supreme Administrative Court rules in favour of Thawil, upholding the Central Administrative Court’s verdict, the Cabinet will be obliged to reinstate the former NSC chief and find a new position for the current office holder, according to the law.

With yesterday’s court ruling, Thawil is eligible to petition the National Anti-Corruption Commission (NACC) against the prime minister and her Cabinet for alleged malfeasance involving their order and decision to transfer him.

If the NACC agrees that the transfer was unfair and resolves to pursue the case, the PM and all her Cabinet members are required to suspend their duties, pending a verdict by the Supreme Court’s Criminal Division on Political Office Holders.

The Administrative Court yesterday rescinded Yingluck’s order, issued on September 7, 2011, to second Thawil as an adviser to the PM’s Office, and ordered the prime minister to reinstate Thawil retroactively from the day he was transferred.

Yingluck was ordered to take actions to reinstate Thawil as soon as possible.

Thawil said that although he was happy with the court ruling, he had yet to wait and see whether the prime minister would appeal against it in the Supreme Administrative Court.

“I have to see the reaction of the prime minister first. But I am happy that the Administrative Court issued the ruling. Still, there are several others who are suffering and have not yet received justice,” Thawil said.

“I would like other government officials to receive justice as well. It’s very good that I have come this far The merit protection committee rejected my appeal. Now that the Administrative Court has issued this ruling, it will serve as precedent for other officials.”

Thawil was removed apparently as the Yingluck government wanted to promote Pol General Priewphan Damapong as National Police chief. At that time, Wichean was the police chief and he vowed not to let go of that position unless he was made the NSC chief. Thawil said yesterday that the court ruling, if not challenged by Yingluck in the Supreme Administrative Court, would require the prime minister to revoke her orders appointing Wichean and Paradorn to the NSC post.

Asked whether the peace dialogue with the southern insurgents would be affected if Paradorn were removed from the NSC post, Thawil said he did not want to comment on it as it would take sometime before he could get his post back.

Reacting to the court ruling, Paradorn said he would continue his duty as the NSC chief until there was a royal command to remove him from the position.

But, he said, the government could appeal against the court’s ruling.

He said that if the government complied with the court’s ruling, it would find him a new position. “I will have no problem with it,” Paradorn said.

He said the court’s ruling would not affect the peace dialogue with the BRN-Coordinate group on June 13 as the process to remove him from the position would take time.


German ex-convict ‘just holidayed’
THe Nation / Phuket Gazette
PHUKET: The German ex-convict who managed to escape from Bangkok’s Suvarnabhumi Airport while being escorted from Australia to Germany, said he simply wanted to enjoy the city’s tourist sites before going home.

The man, who was arrested at the German Embassy in Bangkok, also said he was impressed after visiting those places and that he would certainly come back, according to Panu.

Police took Kohl to Suvarnabhumi in a van yesterday for a re-enactment of his escape. He was accompanied by some 50 policemen and security guards and was mobbed by a large group of media photographers and cameramen.

In a brief interview with the media at the airport, Kohl said he did not plan the escape on May 15 and that he was just “lucky”.

After his escape, the German said he had remained in Bangkok the whole time. “I holidayed for two weeks. It’s enjoyable – a very nice country,” he said with a smile. “I want to see Thailand again; it’s a beautiful country.”

Kohl told investigators he had escaped from the room where he was being held, while his Australian guards were asleep. He then hid inside a ventilator shaft, according to Sita Divari, the Airports of Thailand chairman, who also accompanied the German to Suvarnabhumi yesterday.

After remaining inside the airport for about 30 hours, Kohl used a coin to open a security door’s control box before cutting its wires. He managed to open the door without starting an alarm, and then jumped on a public bus heading into the city.

His comments were made on World No Tobacco Day (WNTD), during the launch of the World Health Organisation (WHO)’s campaigned “Ban Tobacco Advertising, Promotion and Sponsorship”. The campaign is aimed at giving its 194-member countries a glimpse into the world of big tobacco and the various schemes it employs to indirectly marke