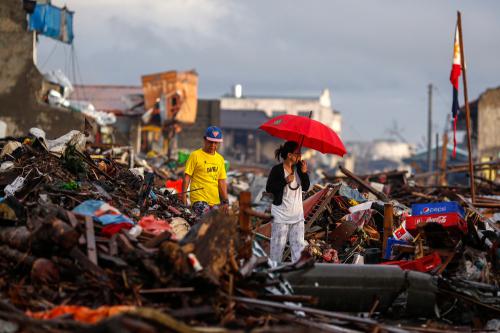 In an interview with Reuters and the Associated Press, he also said regional power Iran should only be allowed to attend if it stopped taking part in the bloodshed in Syria and withdrew its forces and proxies.

The Coalition had previously said it was ready to attend if humanitarian aid corridors were set up and political prisoners released. It insists that President Bashar al-Assad can play no future role in Syria.

“We are now ready to go to Geneva,” said Jarba on a visit to Cairo, adding that the opposition views the Geneva talks as a step to a leadership transition and a “genuine democratic transformation in Syria”.

Syria said on Wednesday that Western countries which also demand that Assad step down should either stop “dreaming” or forget attending the peace talks.

Jarba rejected the idea of Iran attending “under the current reality”.

“Iran is responsible for and takes part in the killing in Syria in a very clear way. It killed thousands of Syrians with its Revolutionary Guards and mercenaries from Hizbollah, which is considered a terrorist group,” he said.

“If Iran is serious about resolving the Syrian crisis, it must first withdraw its Revolutionary Guards and (Lebanese) Hizbollah mercenaries.”

Iran is the main backer, along with Russia, of Assad during a conflict that has lasted more than two years, killed more than 100,000 people and uprooted millions more. Tehran has said it would attend Geneva 2 if invited and on Wednesday called for a ceasefire ahead of the talks scheduled for January 22.

PHUKET: The United States said on Wednesday it had advised U.S. airlines to take steps to operate safely over the East China Sea as it tries to determine whether China’s new airspace defence zone rules apply to civil and commercial aircraft.

“In the meantime U.S. air carriers are being advised to take all steps they consider necessary to operate safely in the East China Sea,” she added.

PHUKET: Philippines’ post-typhoon reconstruction could take as long as 10 years, with the leadership of President Benigno Aquino put to a test amid complex problems such as property rights, missing title deeds and land zoning, experts said on Wednesday.

The task will likely take longer and cost more than the rebuilding of Indonesia’s Aceh province after the 2004 tsunami, they said.

Super typhoon Haiyan wiped out or damaged practically everything in its path as it swept ashore on November 8, with seven-metre storm surges destroying around 90 percent of the city of Tacloban in Leyte province alone.

Haiyan killed at least 5,500 people, left more than 1,700 missing, displaced as many as four million and destroyed around $563 million worth of crops and infrastructure.

“The enormity of this disaster is unprecedented at least in the Asia-Pacific region in terms of the geography,” said Sanny Jegillos, coordinator for crisis prevention and recovery at the United Nations Development Programme (UNDP). “It’s much, much larger than the tsunami in Aceh.

The government’s initial estimates point to a reconstruction cost of as much as 250 billion pesos. Aceh’s rebuilding over eight years required nearly $7 billion, funded by the Indonesian government and international donors.

Manila has said new structures in the typhoon-prone areas must be able to withstand winds of 300 kph, close to Haiyan’s maximum winds when it slammed into Eastern Samar province before crossing the central Philippines.

Sonny Rosal, head of the United Architects of the Philippines which is helping the National Housing Authority (NHA) design stronger houses, said there were challenges related to government buy-outs of landowners in risky areas, re-establishing title and revising the national building code which now specifies that public structures must withstand winds of only up to 250 kph.

“What is being discussed now in the NHA is that it may take us 10 years to be able to rebuild. It’s not that easy. A lot is involved here,” Rosal said. “It’s like building a new country.”

On Wednesday, a government task force assigned to draw up a recovery and rehabilitation plan submitted its immediate, medium-term and long-term goals to Aquino, who demanded more specific details before giving final approval. The task force will report back to Aquino on Friday with more refinements.

That plan will likely identify only immediate needs and plans of action, since a longer-term rebuilding strategy will take weeks if not months to complete, officials said.

In Japan’s case, it completed its long-term reconstruction plan six months after the March 2011 earthquake and tsunami.

“In this area, there was a storm surge and strong wind combination.”

PHUKET: Vietnam will hand out fines of 100 million dong (about 152,000 baht) to anyone criticising the government on social media, under a new law announced this week, the latest measure in a widening crackdown on dissent by the country’s communist rulers.

Comments that did not constitute criminal offences would trigger fines if held to be “propaganda against the state”, or spreading “reactionary ideology”, according to the law signed by Prime Minister Nguyen Tan Dung.

Vietnam has repeatedly drawn fire for the harsh treatment and lengthy jail terms it has given to bloggers who criticised its one-party regime. The number of arrests and convictions has soared in the last four years.

The new decree is vaguely worded and did not say what comments amounted to a criminal offence, which can be punished with prison, or an “administrative violation” that rates a fine.

Internet penetration is soaring in a country of an estimated 90 million people, a third of whom use the internet and about 20 million of whom have Facebook accounts, a report published at a seminar on informatio