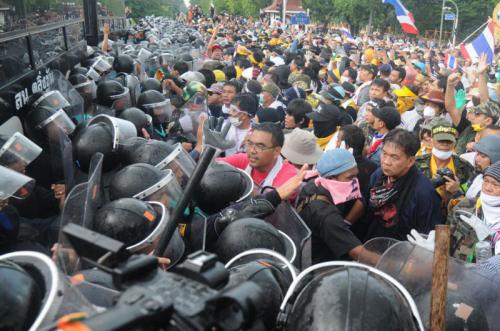 The protesters earlier managed to lay siege to two key government offices – the Finance Ministry and the Foreign Ministry – and they had entered the Government Complex in Chaeng Wattana, where tens of thousands of state officials work.

The protesters yesterday visited different ministries, calling on officials to join forces to help root out the so-called “Thaksin regime” and pushing them to go on strike.

After marching for four hours, the protesters led by former Democrat MP Suthep Thaugsuban moved from the Finance Ministry to the Government Complex on Chaeng Wattana Road.

He said he would stay overnight before moving on to the next place. The protest might lead to suspension of government operations.

Meanwhile, national police chief General Adul Saengsingkaew said the situation in Bangkok and nearby areas would be under control thanks to the Internal Security Act. He said there was no need at present to issue an emergency decree, which allows officials to easily and widely control the movement of people.

In its eighth announcement, the Peacekeeping Centre said yesterday that it was prohibiting the carrying of weapons in specific areas. Items listed as weapons include slingshots, metal balls, metal sticks and fireworks.

The raucous, whistle-blowing protesters were met by several flag-waving, whistle-blowing civil servants at some ministries. A hundred officials at the Public Health Ministry gathered outside the Office of the Permanent Secretary’s building to greet the protesters, while several were also waiting to meet the anti-government crowd at the Commerce Ministry.

“Frankly speaking, I don’t like this government,” a Telephone Organisation of Thailand employee, who asked to remain anonymous, told DPA. “There have been many irregular practices under this administration.”

Thousands of people rallied in front of the Department of Special Investigation (DSI office near the Justice Ministry at Government Complex yesterday.

The DSI closed its doors at 11am yesterday as director-general Tarit Pengdith reported for work at Parliament to help Justice Minister Chaikasem Nitisiri set up a war room.

Separately, hundreds of protesters sealed off the Commerce Ministry, which is located on Sanambinnam Road in Nonthaburi, at 9.30am yesterday and returned at 12.40pm as part of their visits to every ministry.

A large company of police officers was deployed to protect the ministry and officials were sent home. A foreign envoy from a European country was left stranded for a while at the Commerce Ministry compound, but was eventually safely escorted out.

Srirat Rastapana, permanent secretary to the ministry, said all officials had been told to save their data on a flash drive so they could work from home.

Other ministries targeted by the protesters have kept their gates closed, while some, such as the Foreign Ministry, have allowed their officials to either go home or work from a different venue.

PHUKET: Previously lauded as a successful country in combating the Aids epidemic, Thailand’s attempt to fight HIV/Aids is facing a big challenge as funding from international agencies continues to drop.

This concern, raised by health advocates, has prompted the National Aids Committee to consider setting up an Aids Prevention Fund, supported by domestic financial resources, to support its campaign.

Aids activists worry that the reduced international budget will affect their massive HIV campaign – the launching of HIV-testing mobile units in 30 provinces to help people know their HIV status and to get earlier treatment.

“The HIV/Aids-prevention campaign has deteriorated during the past few years,” said Dr Sorakij Bhakeecheep, director of the National Health Security Office’s Bureau of Secretary and Tertiary Care Support.

In 2011, the country’s spending on HIV/Aids-prevention was only 13 per cent of the total national Aids programme. It mainly relied on external resources like the Global Fund, an international financing institution to fight AIDS, tuberculosis and malaria. Most money under the fund was distributed to non-governmental organisations working on HIV/Aids.

In 2010, Thailand’s expenditure on the campaign was Bt7.7 billion, and in 2011 Bt9.9 billion. About 73 per cent of this amount was allocated for treatment and 13 per cent on prevention.

During 2003 to 2008, as a low-income country, Thailand received about US$170 million (5.4 billion baht) in funding to support campaigns and activities against HIV/Aids. As Thailand was classified as a low middle-income country by the World Bank, it was eligible for funding support for the HIV/Aids-prevention programme by the Global Fund. The allocation was based on the recipient’s financial condition and HIV/Aids prevalence, as well as the effectiveness of disease-control programmes.

When the World Bank placed Thailand in the middle-income country category for 2011-2014, Thailand won only $63 million for HIV/Aids-prevention programmes.

The amount is set to fall further due to the country-ranking upgrade by the World Bank. Thailand will be allowed only 30 per cent of the total fund of the Global Fund. That means Thailand has to consider relying more and more on domestic financial resources.

“Of course, non-government organisations would face a crisis as their financial resources also relied mainly on international donors like the Global Fund,” said Dr Nakorn Premsri, a director of the principal recipient administrative office of Thailand’s Global Fund.

Nimitr Tian-udom, director of the Aids Access Foundation, said his organisation now plans to expand the HIV-testing mobile units programme to 30 provinces. People who test positive would be able to get the anti-retroviral treatment at an earlier stage.

Because of the lack of funds, channels to communicate with people for such a service are limited, he said.

To boost the campaign against HIV/Aids in Thailand, the National Aids Committee has initiated the setting up of a national Aids fund to support both governmental and non-governmental agencies’ work on HIV/Aids-prevention programmes. They aim to reduce new HIV infections from 10,000 cases per year to 2,000 cases within five years.

Citing calculations by the Disease Control Department, Sorakij said the government would allocate 200 million baht to 300 million baht for the first year of the fund’s establishment.

The spending under this fund would focus on preventing the spread of disease among the key affected populations – such as men who have sex with men,