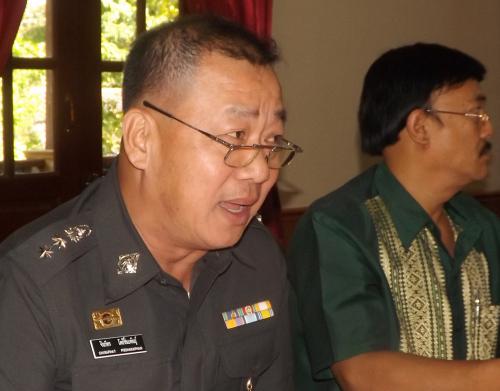 As a result, all taxi rank operators in Phuket must identify themselves to local police stations by December 31, the same deadline day for all taxi, tuk-tuk and tour van drivers on the island to become legal (story here).

“Almost all the taxi ranks on the island are in front of hotels and along popular beaches, so we want to clear these areas for residents and tourists,” Jaturong Kaewkasi, Chief Transport Technician of the Phuket Land Transport Office (PLTO), told those in a meeting at the Organized Crime Center in Phuket Town.

The requirement was signed into effect by a Phuket Provincial Government proclamation issued on November 18, Mr Jaturong explained.

“Every time we inspect a taxi rank, the drivers say they have the PLTO’s permission to park their vehicles along that section of the street,” he said angrily.

“If the PLTO can clarify, then we will know exactly who should be working where, and take action accordingly,” Col Chiraphat said.

“In the past, illegal taxi drivers protested when police arrested them, and if we didn’t arrest them, people said we weren’t doing our job. Now we will be able to arrest those who aren’t working within the confines of the law,” he said.

Phuket Vice Governor Chamroen Tipayapongtada assured those at the meeting that the authorities will enforce a zero-tolerance policy of drivers flouting the law after the December 31 deadline.

“Every District Office will decide where taxi ranks will be allowed [and not allowed]. After all the taxi ranks have been affirmed and approved by the PLTO, I will not allow any more to take root on our island,” he said.

The number and location of all legal taxi ranks will be announced at a later date, Vice Governor Chamroen confirmed.