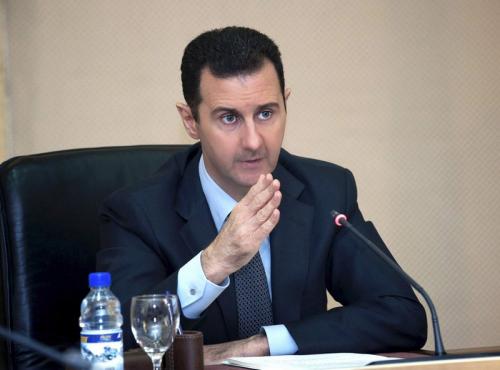 
Syria threatens to strike at rebels in Lebanon
Reuters / Phuket Gazette
PHUKET: Syria has warned it may strike at rebels hiding in neighbouring Lebanon if the Lebanese army does not act, as its patience “is not unlimited”, the state news agency SANA said yesterday.

Syria’s Foreign Ministry told its Lebanese counterpart late on Thursday that a “large number” of militants had crossed Lebanon’s northern border into the Syrian town of Tel Kalakh over the past two days, SANA said.

“Syria expects the Lebanese side to prevent these armed terrorist groups from using the borders as a crossing point, because they target Syrian people and are violating Syrian sovereignty,” the diplomatic cable said.

It said Syria’s “patience is not unlimited”, even though “Syrian forces have so far exercised restraint from striking at armed gangs inside Lebanese territory.”

Fighting near the border resulted in a large number of casualties, SANA said, before the gunmen retreated into Lebanon.

Lebanon has a policy of “dissociation” from the two-year-old civil war in Syria but officials say they feel their country is increasingly at risk of being dragged into a conflict that the United Nations says has killed 70,000 Syrians.

More than one million Syrians are believed to have taken shelter in Lebanon. They live among a nation of 4 million, which fought its own devastating 1975-1990 civil war and whose own sectarian tensions between Christians, Sunni and Shi’ite Muslims have been heightened by the fighting in Syria.

Tensions between Lebanese groups that support the Syrian opposition and those that support Syrian President Bashar al-Assad have been intensifying and have sometimes turned violent.


Myanmar parliament to review controversial constitution
Reuters / Phuket Gazette
PHUKET: Myanmar’s parliament took the first step yesterday toward the possible amendment of the constitution which was drafted under a military regime and bars Nobel laureate and opposition leader Aung San Suu Kyi from the presidency.

The constitution, ratified after a rigged 2008 referendum and widely seen as undemocratic, disqualifies presidential and vice-presidential candidates whose spouses or children are citizens of a foreign country. Suu Kyi’s late husband, academic Michael Aris, was British, as are their two grown-up sons.

The constitution also reserves a quarter of parliamentary seats for military personnel chosen by the armed forces chief.

The review was proposed by Aye Myint and Thein Zaw, both former generals and senior members of the ruling, military-backed Union Solidarity and Development Party (USDP), said Ohn Kyaing, a member of Suu Kyi’s party.

Military delegates also voted in favour of the proposal.

“They seem to have realised that it’s essential to amend the present constitution for the country to build genuine democracy,” Ohn Kyaing said.

The junta stepped aside in March 2011, when President Thein Sein took office after the USDP swept a 2010 general election. He has opened up the country and started to modernise the economy.

Suu Kyi’s National League for Democracy (NLD) boycotted the general election but she and 42 colleagues won by-elections in April last year to take seats in parliament. She has made amending the constitution a priority.

The review could lead to changes that would make it possible for Suu Kyi to become president after a 2015 general election that the NLD is expected to win. It might also decide the future role and political scope of the military.

A review committee would include members of many political parties and outside experts, a senior parliamentary official said.

A military lawmaker, who asked not to be identified, welcomed amendments that might remove obstacles for a Suu Kyi presidency.

“Personally, I’m sure she will make a capable leader,” he said.

U.N. special rapporteur on human rights and counterterrorism, Ben Emmerson, visited Pakistan for three days this week as part of his investigation into the civilian impact of the use of drones and other forms of targeted killings.

“As a matter of international law, the U.S. drone campaign in Pakistan is… being conducted without the consent of the elected representatives of the people, or the legitimate Government of the State,” Emmerson said in a statement issued by the Office of the High Commissioner for Human Rights in Geneva.

“It involves the use of force on the territory of another state without its consent and is therefore a violation of Pakistan’s sovereignty,” he said.

Emmerson said in January he would investigate 25 drone strikes in Pakistan, Yemen, Somalia, Afghanistan and the Palestinian territories. He is expected to present his final report to the U.N. General Assembly in October.

Washington had little to say about Emmerson’s statement.

“We’ve seen his press release. I’m obviously not going to speak about classified information here,” State Department spokeswoman Victoria Nuland said. “We have a strong ongoing counterterrorism dialogue with Pakistan and that will continue.”

“We have a solid working relationship with them (Pakistan) on a range of issues, including a close cooperative security relationship, and we’re in touch with them on a regular basis on those issues.”

“These proud and independent people have been self-governing for generations, and have a rich tribal history that has been too little understood in the West,” he said. “Their tribal structures have been broken down by the military campaign in FATA and by the use of drones in particular.”

The tribal areas have never been fully integrated into Pakistan’s administrative, economic or judicial system. They are dominated by ethnic Pashtun tribes, some of which have sheltered and supported militants over decades of conflict in neighbouring Afghanistan.

Clearing out militant border sanctuaries is seen by Washington as crucial to bringing stability to Afghanistan, particularly as the U.S.-led combat mission ends in 2014.

Most, but not all, attacks with unmanned aerial vehicles have been by the United States. Britain and Israel have also used them, and dozens of other countries are believed to possess the technology.

“It is time for the international community to heed the concerns of Pakistan, and give the next democratically elected government of Pakistan the space, support and assistance it needs to deliver a lasting peace on its own territory without forcible military interference by