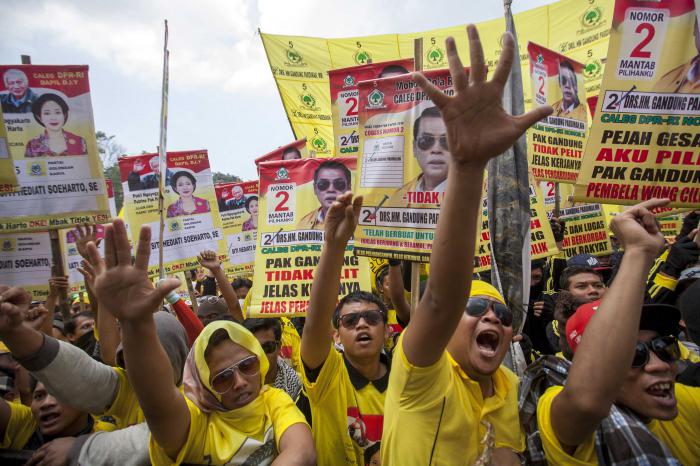 PHUKET: It was Indonesia’s most ubiquitous smile. Once dubbed the smiling general despite his iron rule of more than three decades, the image of former President Suharto now waves genially from the election campaign poster of one of his daughters.

It marks a tentative return to national politics of the family of the autocratic leader who was forced from office in 1998 as the world’s fourth most populous nation descended into economic and social chaos.

Much of the blame for that crisis focused on the nepotism and corruption that became the hallmark of Suharto’s later years in power and which saw family members and close associates amass fortunes and come to dominate the country’s economy.

But as Indonesia’s economic growth has weakened and disenchantment among voters with the current government grows, so Suharto’s political heirs have tried to promote an image of him as a leader who brought strength and stability ahead of parliamentary elections next Wednesday.

Enter 54-year-old Siti Hediati Suharto, popularly known as Titiek, who on the campaign trail in the city of Yogyakarta in central Java claimed that Indonesia had made little headway since her father’s downfall.

The Golkar party, which she is campaigning with and which was the parliamentary rubber stamp of Suharto’s long rule, is also turning openly to a legacy that until recently would have been political poison.

“I want to continue to take the struggle (of my father) forward,” she told Reuters in an interview in the densely populated region from which her father came and which she hopes to represent in the national parliament.

“Reformasi (the reform era) started 16 years ago and we’ve been changing presidents but it seems Indonesia isn’t going anywhere,” she said before heading off to a campaign rally with her older sister Siti Hardiyanti Rukmana, 65 and known across Indonesia as Tutut.

After the parliamentary election, voters on July 9 will choose the fifth president to lead Indonesia since Suharto fell from grace. He died in 2008.

Despite warnings it could disintegrate without Suharto’s strong hand, Indonesia has remained intact to become the world’s third largest democracy.

But opinion polls suggest voters are disappointed with the outgoing government of President Susilo Bambang Yudhoyono and will most likely opt for a completely fresh face in Jakarta governor and relative political novice Joko “Jokowi” Widodo.

His popularity is likely to give his party, the PDI-P, the largest number of seats, polls show. Golkar, which polls predict will come second, hopes nostalgia for the economic successes of the Suharto era will bring in votes.

“(Titiek’s) lineage will definitely increase votes for Golkar in the legislative election, because there are many loyalists of Suharto and many people who miss that … era,” said Tantowi Yahya, a legislator and spokesman for Golkar, saying it would help nationally, not just in her constituency.

To help polish that memory, Suharto’s half-brother Probosutedjo just over a year ago helped build a museum at the site of the former president’s humble birthplace outside Yogyakarta. At the entrance are displayed images of the ex-leader as a general and a pious Muslim.

That cuts no ice with some.

“The way he governed was tyrannical,” said Litifah, 18, who works with one of Indonesia’s biggest Muslim organisations.

“It was a time for cronyism and corruption on a very large scale,” he said. “Suharto’s children should also be held responsible for their wealth. But no one will try them. Instead they’re trying to come back as heroes which is very ironic.”

Suharto was charged with corruption but never went on trial.

His youngest son Hutomo Mandala Putra, or Tommy as most refer to him, had a graft conviction from 2000 relating to a land deal overturned. He was jailed in 2002 for ordering the killing of the judge who convicted him in the graft case, for which he served five years of a 15-year jail term.

None of the other children has faced trial over corruption.

With no suggestion of irony, Titiek did point to graft as a major issue in Indonesia.

“If I watch TV, every day (there is) corruption, there are all these food imports, all these problems,” she said in a reference to a stream of high profile corruption trials, almost unheard of in the Suharto era, and concerns that Indonesia is too reliant on imports of basic food.

“Even if the Suhartos were corrupt, at least the people were well off,” said Juani, a middle-aged housewife attending the relatively modest campaign rally.

Titiek’s older sister, Tutut, once a political and business force during their father’s rule, failed to muster enough support to herself be able to contest the presidency in 2004.

But the way some of the crowd rushed to shake her hand at the latest rally pointed to her continued popularity. She declined, via an aide, to talk to Reuters.

Their four other siblings have stayed out of the latest political limelight, including Tommy, 51.

However, some media reports have suggested he might have his sights on the next campaign in five years.

“The people demand (we have a role),” said Titiek. “We try to shy away but some people always ask why doesn’t the Suharto family show up.”

She said she did not seek the presidency for herself. As for other members of her family: “I don’t know. Maybe in due time.”