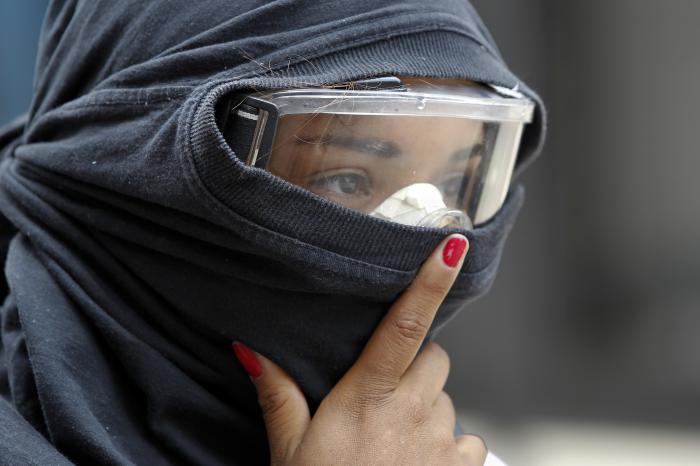 PHUKET: Venezuelan students are marching barefoot, building crucifixes and planning to burn effigies of President Nicolas Maduro to try and breathe new life into their protest movement over Easter.

The religious-themed demonstrations are the latest tactics in anti-government protests since early February that have convulsed the South American OPEC nation and led to 41 deaths.

But enthusiasm among opposition supporters for the street protests appears to be waning, with numbers dropping from previous months and Maduro’s position seemingly safe despite his constant references to coup plots against him.

“We may be fewer, but we are staying on the street!” vowed law student Nicole Gonzalez, who joined hundreds in Caracas at a barefoot march on Wednesday and a staging of Jesus’ “Via Crucis” walk with the crucifix on Thursday.

“These events symbolize the suffering we Venezuelans are enduring,” added Gonzalez, 18, who gave up a planned Easter holiday with friends on Margarita island to protest instead.

About 500 demonstrators joined Thursday’s enactment of the Christian tradition of the Stations of the Cross, where Jesus was said to have stopped on his way to being crucified.

Each stop symbolized one complaint, with placards reading “devaluation,” “censorship” and “insecurity” for example. Police, though, blocked them from completing all 15 stops.

Nearby in the Chacao district of Caracas, about two dozen masked youths briefly took over a bus on Thursday, before battling with police, Reuters witnesses said. Residents fled during a two-hour standoff between militant protesters throwing petrol bombs and officers responding with teargas.

Students also planned mock crucifixions for Good Friday, and to burn puppets of Maduro and the government’s powerful No. 2 Diosdado Cabello, in a twist on some Catholics’ custom of symbolically burning Judas, the disciple who betrayed Jesus.

Student activists have effectively broken with Venezuela’s moderate opposition leadership, who have begun talks with Maduro and his top officials in order to defuse the crisis.

Two rounds of formal talks, mediated by the Vatican’s envoy in Caracas and foreign ministers from the South American bloc Unasur, have yielded few concrete results though they have calmed emotions around the country.

While both sides have agreed to form a truth commission to analyze recent events, the government has not acceded to opposition calls for an amnesty for opponents in jail.

The students, and hardline opposition figures like jailed protest leader Leopoldo Lopez and legislator Maria Corina Machado, oppose the talks unless all opponents are freed.

“This is not a dialogue. They haven’t given anything, the government hasn’t conceded a thing,” said mother-of-two Carolina Fernandez, 48, carrying a cross with the word “Justice” emblazoned on it during the barefoot march in Caracas.

“We have achieved nothing yet. We have to keep fighting. I’m here to support these kids, to let them know they’re not alone,” added Fernandez, walking with her husband and son.

Frustrated by successive election losses, the protesters took to the streets from early February demanding solutions to Venezuela’s rampant violent crime, soaring inflation, and shortages of basic goods from milk to car batteries.

Hardliners had hoped for a “Venezuelan Spring” that would oust Maduro, but they failed to bring millions onto the streets as they had wanted. Crucially for the president, the armed forces appeared to remain squarely behind him.

Some of the largest rallies drew tens of thousands, though, and sporadic protests continue around the nation.

Maduro says protesters, encouraged by the U.S. government and international media, are seeking to topple him as happened to his predecessor Hugo Chavez during a brief coup in 2002.

Those killed in daily street clashes around the country have included both government and opposition supporters, and members of the security forces. Most were shot dead.

More than 650 people have also been injured, and more than 100 people remain behind bars of some 2,000 arrested.

Dozens of students are camping outside the U.N. offices in Caracas, their colourful tents blocking a highway. Used teargas canisters are stacked on the floor as a symbol of repression.

“We’re not moving until everyone’s out of jail,” said Efrain Barreto, 19, a languages student from the provincial city of Maracay. “They say we are fascists but this is a peaceful protest. They say we are bourgeoisie but look at us – we all come from humble families and can hardly pay our studies.”

Pollsters say approval levels for both Maduro and the opposition have fallen during the crisis, while an already slowing economy has suffered a further drag from the impact of violent clashes on businesses and transport.

Maduro, who calls himself the “son” of Chavez, has just celebrated the anniversary of his April 14 election last year. He wants to preserve the OPEC state’s popular welfare policies while tinkering with his predecessor’s statist economic model.

Critics say 15 years of autocratic socialist rule have wrecked what should be one of Latin America’s most prosperous economies, as well as setting back democratic freedoms.